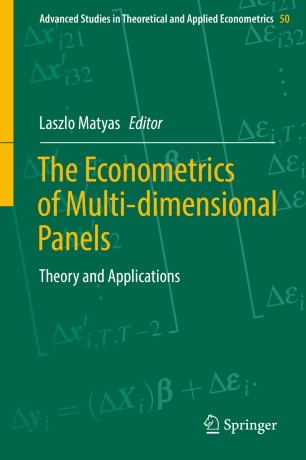 The Econometrics of Multi-dimensional Panels

This book presents the econometric foundations and applications of multi-dimensional panels, including modern methods of big data analysis.

The last two decades or so, the use of panel data has become a standard in many areas of economic analysis. The available models formulations became more complex, the estimation and hypothesis testing methods more sophisticated. The interaction between economics and econometrics resulted in a huge publication output, deepening and widening immensely our knowledge and understanding in both. The traditional panel data, by nature, are two-dimensional. Lately, however, as part of the big data revolution, there has been a rapid emergence of three, four and even higher dimensional panel data sets. These have started to be used to study the flow of goods, capital, and services, but also some other economic phenomena that can be better understood in higher dimensions. Oddly, applications rushed ahead of theory in this field.

This book is aimed at filling this widening gap. The first theoretical part of the volume is providing the econometric foundations to deal with these new high-dimensional panel data sets. It not only synthesizes our current knowledge, but mostly, presents new research results. The second empirical part of the book provides insight into the most relevant applications in this area. These chapters are a mixture of surveys and new results, always focusing on the econometric problems and feasible solutions.

Laszlo Matyas is a well-known Hungarian-Australian economist/econometrician. He (co)authored and (co)edited several high impact publications in econometrics, mostly in the field of panel data. Currently he is a University Professor at the Central European University (CEU – Budapest, Hungary). Earlier, among others, worked as Senior Lecturer at Monash University (Melbourne, Australia), was the founding Director of the Institute for Economic Analysis (Budapest, Hungary), and also served as Provost of CEU. The new volume he put together on the Econometrics of Multi-dimensional Panels, forthcoming with Springer-Verlag in 2017, is the 10th book he compiled over the last two decades.