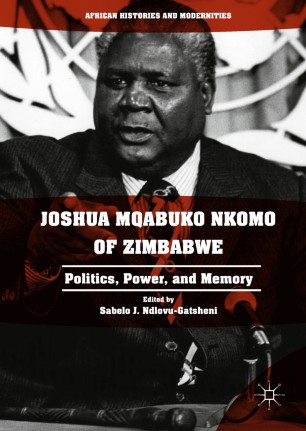 This book is a pioneering study of Joshua Mqabuko Nkomo, a Zimbabwean nationalist whose crucial role in the country’s anti-colonial struggle has largely gone unrecognized. These essays trace his early influence on Zimbabwean nationalism in the late 1950s and his leadership in the armed liberation movement and postcolonial national-building processes, as well as his denigration by the winners of the 1980 elections, Mugabe’s Zimbabwe African National Union-Patriotic Front. The Nkomo that emerges is complex and contested, the embodiment of Zimbabwe’s tortured trajectory from colony to independent postcolonial state. This is an essential corrective to the standard history of twentieth-century Zimbabwe, and an invaluable resource for scholars of African nationalist liberation movements and nation-building.

Sabelo J. Ndlovu-Gatsheni is Professor at the University of South Africa. His recent publications include Mugabeism: History, Power and Politics in Zimbabwe (Palgrave Macmillan 2015).