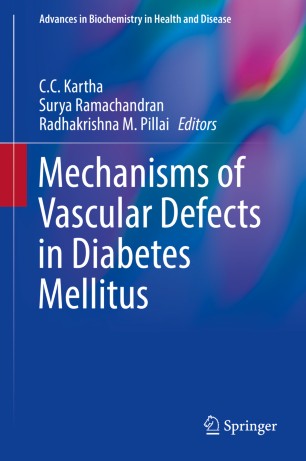 Part of the Advances in Biochemistry in Health and Disease book series (ABHD, volume 17)

This book comprising 24 chapters is devoted to the mechanisms for the pathogenesis of the spectrum of vascular diseases in diabetes. Cellular events and molecular pathways that regulate the structure and function of both small and large arteries, the dysregulation in these vessels caused by hyperglycemia, oxidative stress, metabolic and haemostatic derangements secondary to diabetes, are discussed. Mechanisms of vascular remodelling and rupture of atherosclerotic plaques in diabetes are also covered.  Several of the reviews also discuss therapeutic targets and drugs employed to reduce endothelial dysfunction and vascular inflammation in diabetes. All articles are authored by experts in their respective research fields.

This compendium will be of interest to both basic scientists and clinicians in the pursuit of unravelling the molecular basis of vascular diseases and also to those who seek to identify targets for therapy of vascular complications of diabetes.