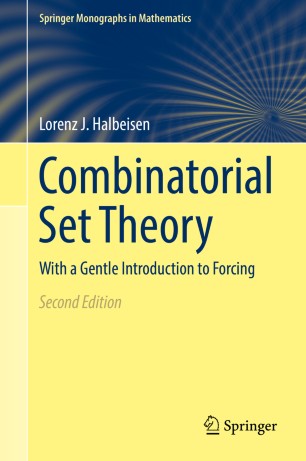 With a Gentle Introduction to Forcing

This book, now in a thoroughly revised second edition, provides a comprehensive and accessible introduction to modern set theory.
Following an overview of basic notions in combinatorics and first-order logic, the author outlines the main topics of classical set theory in the second part, including Ramsey theory and the axiom of choice. The revised edition contains new permutation models and recent results in set theory without the axiom of choice. The third part explains the sophisticated technique of forcing in great detail, now including a separate chapter on Suslin’s problem. The technique is used to show that certain statements are neither provable nor disprovable from the axioms of set theory. In the final part, some topics of classical set theory are revisited and further developed in light of forcing, with new chapters on Sacks Forcing and Shelah’s astonishing construction of a model with finitely many Ramsey ultrafilters.
Written for graduate students in axiomatic set theory, Combinatorial Set Theory will appeal to all researchers interested in the foundations of mathematics. With extensive reference lists and historical remarks at the end of each chapter, this book is suitable for self-study.