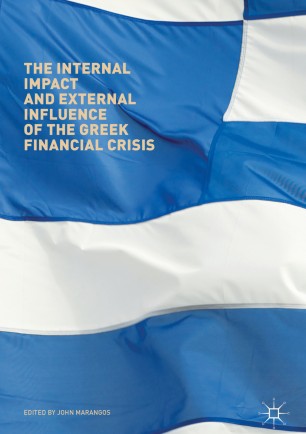 The Internal Impact and External Influence of the Greek Financial Crisis

This contributed volume explores the political economy and socioeconomic aspects of the Greek Financial Crisis both within the country's borders and as part of the global economy. With chapters authored by international experts, this book examines and explicitly deals with specific and important issues that have been ignored by the dominant socioeconomic theory and practice, which have largely focused on the causes and broad economic consequences of the crisis. Discussions include the efficacy of new EU institutions created to address the crisis, the rise of unregistered economic activity, and comparisons with financial crises in countries beyond Europe. This diverse collection argues that the Greek Financial Crisis was not just an economic crisis, but a political and social crisis as well, one with repercussions beyond Europe.

John Marangos is Professor of Comparative Economic Systems in the Department of Balkan, Slavic, and Oriental Studies at the University of Macedonia, Greece. Focal points of John’s research include international development, transition economics, and innovative methodologies for teaching economics. He is the author of numerous journal articles and books, including Europe in Crisis, co-edited with Nikolas Karagiannis and Aristidis Bitzenis, and a three volume set on comparative economic systems, all published by Palgrave Macmillan.