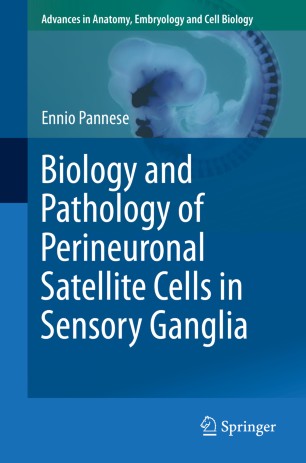 Biology and Pathology of Perineuronal Satellite Cells in Sensory Ganglia

This volume provides a comprehensive and updated review of perineuronal satellite cells in sensory ganglia. For a long time since their discovery by Valentin in the first half of the 19th century these cells received only modest attention. However, some years ago research findings suggested that satellite cells play a role in the development and maintenance of neuropathic pain. As a result, satellite cells are now considered as possible targets for neuropathic pain treatment. Thus, interest in satellite cells has burgeoned. The review is based on the author’s own work as well as on his critical evaluation and systematic arrangement of data scattered through a large number of research papers. The following aspects of perineuronal satellite cells are covered: Shape and structure; molecular characteristics; origin and development; biological and functional properties; relationships with the ganglion sensory neuron; age-related changes; roles under physiological conditions; reactions to experimental and pathological conditions; role in neuropathic pain.

During the course of a long university career, which started in 1952, Professsor Ennio Pannese headed the Institute of Human Anatomy and later the Institute of Histology, Embryology and Neurocytology at the University of Milan. He did his research mainly in the field of the Neurosciences. He is author of more than 200 scientific articles as well as several books. He was a member of the Advisory Boards of the following journals: Neuropathology and applied Neurobiology, Italian Journal of Anatomy and Embryology, Journal of Submicroscopic Cytology and Pathology. He was President of the National College of Histology and Embryology Professors of Italy and Co-ordinator of several research projects of the National Research Council of Italy. He is a fellow of the Accademia Nazionale dei Lincei.