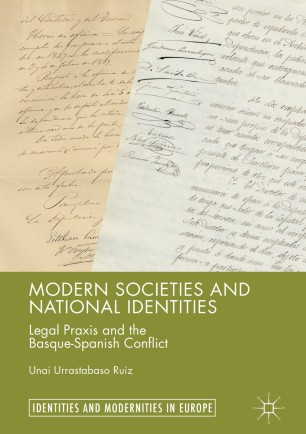 Legal Praxis and the Basque-Spanish Conflict

Part of the Identities and Modernities in Europe book series (IME)

This book offers a novel interdisciplinary approach to interpret the emergence of the Basque-Spanish nationalist conflict. It incorporates into sociological analysis the understanding of law put forward by legal realism and legal pluralism to answer some of the most pressing problems encountered in historical research on this topic. It does so by carrying out a comparative historical analysis which focuses on the puzzle produced by the political trajectories of two traditionally considered Basque territories between 1841 and 1936: Navarre and Vascongadas – the precursor of today’s Euskadi.

Urasstabaso Ruiz argues that the historical and ideological trajectories of these territories need to be understood in relation to their local legal praxis and interpretations of law, which played a key role in how the authorities of these territories responded to the advent of modernisation. Overall, a fresh theoretical alternative is articulated, and the meaning of jurisdictional action is interpreted.

Modern Societies and National Identities will appeal to academics interested in nationalism, the state and modernisation, particularly to those concerned with the Basque Country and the state of Spain.

Unai Urrastabaso Ruiz obtained his PhD from the University of Edinburgh in 2015. He is currently establishing himself as an independent researcher, co-founding emerging projects such as Ikena Estudios Sociales.