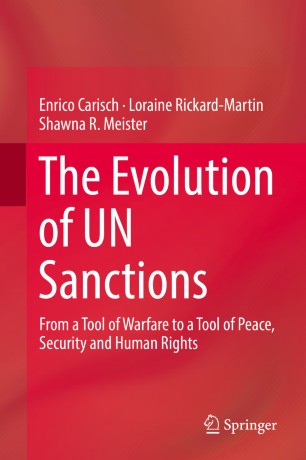 The Evolution of UN Sanctions

From a Tool of Warfare to a Tool of Peace, Security and Human Rights

Marking the 50th anniversary of UN sanctions, this work examines the evolution of sanctions from a primary instrument of economic warfare to a tool of prevention and protection against global conflicts and human rights abuses. The rise of sanctions as a versatile and frequently used tool to confront the challenges of armed conflicts, terrorism, the proliferation of weapons of mass destruction and violations of international humanitarian and human rights law, is rooted in centuries of trial and error of coercive diplomacy. The authors examine the history of UN sanctions and their potential for confronting emerging and future threats, including: cyberterrorism and information warfare, environmental crimes, and corruption.

This work begins with a historical overview of sanctions and the development of the United Nations system. It then explores the consequences of the superpowers' Cold War stalemate, the role of the Non-Aligned Movement, and the subsequent transformation from a blunt, comprehensive approach to smart and fairer sanctions. By calibrating its embargoes, asset freezes and travel bans, the UN developed a set of tools to confront the new category of risk actors: armed non-state actors and militias, global terrorists, arms merchants and conflict minerals, and cyberwarriors.

Section II analyzes all thirty UN sanctions regimes adopted over the past fifty years. These narratives explore the contemporaneous political and security context that led to the introduction of specific sanctions measures and enforcement efforts, often spearheaded for good or ill by the permanent five members of the Security Council.

This work will be of interest to researchers and practitioners in criminal justice, particularly with an interest in security, as well as related fields such as international relations and political science.

Enrico Carisch is a partner in Compliance and Capacity Skills International, LLC. He served as a member of several United Nations groups of experts, was engaged by African and European States and organizations to assist in the strengthening of the management of conflict-sensitive natural resource revenues, and frequently collaborates with international companies, international organizations and academic institutions on improved sanctions compliance measures, services and technologies.

Loraine Rickard-Martin is a partner in Compliance and Capacity Skills International, LLC. She was a sanctions committee secretary and a senior political affairs officer in the Security Council Affairs Division of the UN Department of Political Affairs from 1995 to 2009, a lecturer in United Nations sanctions at Columbia University’s School of International and Public Affairs from 2010 to 2013, and Secretary of the UN High Level Panel on Threats, Challenges and Change from 2003 to 2004.

Shawna Meister is an independent researcher and analyst of international peace and security issues. She has written publications on various subjects including analyses of the effectiveness of sanctions, UN and regional peacekeeping missions, and the UN Peacebuilding Commission. Her research interests have recently broadened to the impact of uninhabited aerial vehicles (UAVs) on the UN system. As a Research Associate for a non-profit organization in Ottawa, Canada, she manages projects, conducts qualitative and quantitative analyses, and works with practitioners and the public to help them transform research into practical applications.

“A heavily documented, multifaceted work: part historical, part analytical and part judgmental or prescriptive in concluding how and where sanctions fit their purpose as well as where and why they have sometimes gone terribly wrong.” (Barbara Crossette, PassBlue.com, 2018)
Buy options