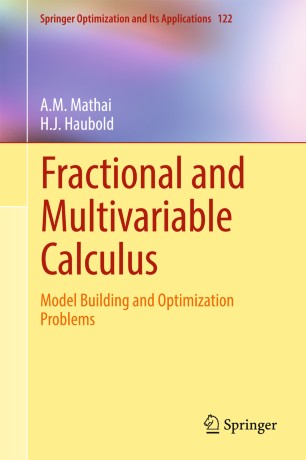 Part of the Springer Optimization and Its Applications book series (SOIA, volume 122)

This textbook presents a rigorous approach to multivariable calculus in the context of model building and optimization problems. This comprehensive overview is based on lectures given at five SERC Schools from 2008 to 2012 and covers a broad range of topics that will enable readers to understand and create deterministic and nondeterministic models.  Researchers, advanced undergraduate, and graduate students in mathematics, statistics, physics, engineering, and biological sciences will find this book to be a valuable resource for finding appropriate models to describe real-life situations.

A.M. Mathai is Emeritus Professor of Mathematics and Statistics, McGill University, Canada, and Director of the Centre for Mathematical and Statistical Sciences, India. He has published over 300 research papers and 25 books on topics in mathematics, statistics, physics, astrophysics, chemistry, and biology. He is a Fellow of the Institute of Mathematical Statistics, National Academy of Sciences of India, served as President of the Mathematical Society of India, and a Member of the International Statistical Institute.  H.J. Haubold is Professor of Theoretical Astrophysics. He has published over 200 research papers and 10 books in physics, astrophysics, and the development of basic space science worldwide. The United Nations Basic Space Science Initiative (UN BSSI) for the worldwide development of astronomy, physics, and mathematics was implemented in 1991 through the joint work of H.J Haubold and A.M. Mathai.

“This book presents the readers with a basic overview of the rigorous approach to the study of fractional and multivariate calculus in the context of model building and optimization problems. This book covers a broad range of topics that will enable readers to fully understand and create deterministic and nondeterministic models. … book is well presented and would be very useful for researchers and graduate students working in several areas including mathematics, physics, chemistry, engineering, finance and even social sciences.” (James Adedayo Oguntuase, zbMATH 1376.26001, 2018)
Buy options