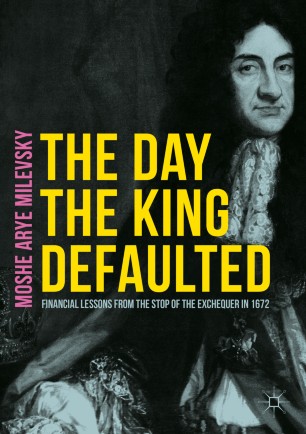 The Day the King Defaulted

Financial Lessons from the Stop of the Exchequer in 1672

This book studies King Charles II's decision to stop all payments from his royal exchequer, a sordid but little-known event in English history with eerie similarities to the cause of the Great Recession of 2008. As with any modern banking crisis, the financial system in 1672 almost collapsed, day-to-day commerce ground to a halt, houses were lost, and ordinary investors suffered – but there was no banking bailout, and no mercy for the goldsmith-bankers who had lent the king millions to fund his unsustainable lifestyle. The royal decision, made in the wake of plagues, fires, and war with the Dutch, left bankers unable to cover their own liabilities and, in the days before bankruptcy, they couldn’t walk away from their obligations and start fresh. Many bankers spent the end of their lives in debtors' prison, but English commoners had little sympathy for the plight of rich financiers – a sentiment echoed after the financial crisis of 2008. Ultimately, this book tells the complete story of the Merry Monarch's financial default (England's first and last) using the lens and language of modern financial products and markets. It covers the precarious history leading up to the infamous day in 1672, the intrigue surrounding the ‘stop’ – including those who traded on inside information beforehand – as well as the attempt by distressed creditors to gain financial restitution.

Moshe Arye Milevsky is Professor of Finance at the Schulich School of Business at York University, Canada. An award-winning author and scholar, he is an expert on the modern and historical intersection of insurance and financial products. He is also a very popular speaker who has delivered over 1,000 presentations around the world.