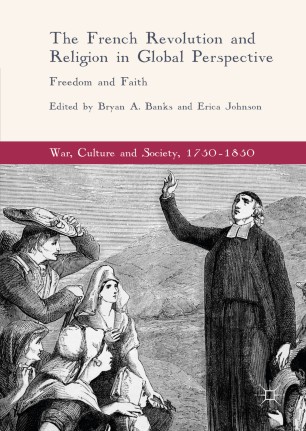 The French Revolution and Religion in Global Perspective

‘In this wide-ranging collection of essays by respected scholars, Erica Johnson and Bryan Banks have assembled an engaging and impressive volume that underscores the ways in which the French Revolution was a moment that redefined faith, piety, and the relationship of organized religious institutions to state and society. Impressive in its global and chronological scope, this edited volume advances our understanding of how women and men, laity and religious elites, from France to Revolutionary Saint Domingue and Guiana to twentieth-century Turkey, have all found themselves forced to grapple with, and refashion, notions of sacred and the secular in response to cultural transformations set in motion by the French Revolution.’

This volume examines the French Revolution’s relationship with and impact on religious communities and religion in a transnational perspective. It challenges the traditional secular narrative of the French Revolution, exploring religious experience and representation during the Revolution, as well as the religious legacies that spanned from the eighteenth century to the present. Contributors explore the myriad ways that individuals, communities, and nation-states reshaped religion in France, Europe, the Atlantic Ocean, and around the world.