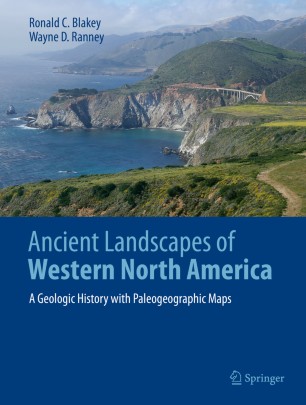 A Geologic History with Paleogeographic Maps

Allow yourself to be taken back into deep geologic time when strange creatures roamed the Earth and Western North America looked completely unlike the modern landscape.  Volcanic islands stretched from Mexico to Alaska, most of the Pacific Rim didn’t exist yet, at least not as widespread dry land; terranes drifted from across the Pacific to dock on Western Americas’ shores creating mountains and more volcanic activity.  Landscapes were transposed north or south by thousands of kilometers along huge fault systems.  Follow these events through paleogeographic maps that look like satellite views of ancient Earth.  Accompanying text takes the reader into the science behind these maps and the geologic history that they portray.  The maps and text unfold the complex geologic history of the region as never seen before.

Ron Blakey taught geology for over 37 years at the university level, mostly at NAU in Flagstaff, AZ.  His specialty is the sedimentary rocks of the Colorado Plateau and surrounding areas including the Pacific Coast region.  He has published well over 50 papers, many as single author, in national and international journals and symposia and two books, one published by Springer (see below).  For the last 25 years, he has constructed paleogeographic maps from regional to global scale – these maps appear in many published geological papers, books, monographs, museums, and are used extensively in general education at all levels.  His maps are based on the geological literature and are constructed as accurately as possible to mimic satellite views of ancient Earth.  Many individual maps represent 40 – 80 or more hours of work each.

Wayne Ranney has been studying the geology of the American West since coming to live in Arizona in 1975. His first residence was at the bottom of the Grand Canyon where he worked as a backcountry ranger. He claims this is where he got all of the rocks in his head. In 1978 he enrolled in the geology program at Northern Arizona University, obtaining bachelor's and master's degrees. It was here that took classes from his colleague Dr. Ron Blakey while working his way through graduate school as a river guide. He began working as a shipboard geology interpreter in 1989 and has traveled the world ever since, completing over one hundred expeditions to the Arctic, the Amazon, Africa, Siberia, and Antarctica. These far-flung adventures have allowed him to see and learn about many different kinds of landscapes but he always returns to the red rock cliffs and canyon country of his native southwest. Wayne currently works as a geology lecturer for Smithsonian Journeys and is a retired adjunct faculty member of Yavapai and Coconino colleges. He is an award-winning author of many books including Sedona Through Time, Carving Grand Canyon, and Ancient Landscapes of the Colorado Plateau. He lives with his wife Helen in Flagstaff, Arizona.