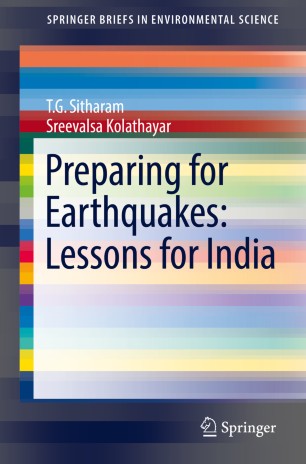 Preparing for Earthquakes: Lessons for India

The primary goals of this brief are to invoke alertness and solidarity among the public in earthquake prone areas of India, and to empower the community to prepare themselves to face and manage the aftermath of an earthquake. The work presented here sheds new light on the action plans to be taken by the common public and public agencies, before, during and after earthquakes to safeguard lives of people and minimize loss of assets.
This carefully presented book articulates various factors related to earthquake preparedness, and develops guidelines and useful tips for communicating them to relevant stakeholders. The book has been divided into three parts: (i) the first providing background which explains earthquakes in general and seismicity of India (ii) the second explores earthquake preparedness intended for individuals, families and various stakeholders, and (iii) the final section which describes various strategies for communities to prepare themselves for a future earthquake.

Prof. Dr. T.G. Sitharam is a KSIIDC Chair Professor in the area of Energy and Mechanical Sciences and Senior Professor at the Department of Civil Engineering, Indian Institute of Science, Bengaluru (IISc). He was former founding Chairman of the Center for Infrastructure, Sustainable Transport and Urban Planning (CiSTUP) at IISc.
He is presently the Chairman of the AICTE South Western Zonal Committee, Regional office at Bengaluru and Vice President of the Indian Society for Earthquake Technology (ISET). He was a Visiting Professor at Yamaguchi University, Japan, and ISM Dhanbad, Jharkhand.
Over the last 25 years, he has carried out seismic microzonation of urban centers in India and developed innovative technologies in the area of fracturing and geotechnical applications, leading to about 500 technical papers, seven books, three patents, 100 consulting projects and two startup companies. He is the chief editor of two international journals in his areas of research and founder President of the International Association for Coastal Reservoir Research (IACRR).

Dr. Sreevalsa Kolathayar pursued his M.Tech from IIT Kanpur, PhD from Indian Institute of Science (IISc) and served as International Research Staff at UPC BarcelonaTech Spain with Marie Curie Fellowship by European Union. He is presently Asst Professor and Research Coordinator in the Dept of Civil Engg, Amrita Vishwa Vidyapeetham University, Coimbatore, India. He served as Chairman of Students Council at IISc and Adviser to Think India, a national forum of students from premier Institutes in India. Dr. Sreevalsa has published several research articles focusing on earthquake hazard and risk assessment. His team has developed a survey based tool and mobile application 'BhookampRaksha' to measure and boost the Earthquake Readiness Index of the public. In the year 2017, Dr. Sreevalsa was featured by The New Indian Express in their Edex anniversary edition and was honored with Edex award: 40 under 40 - South India's Most Inspiring Young Teachers.