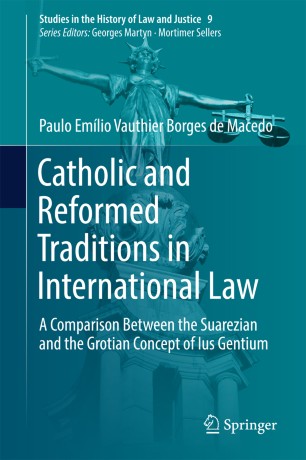 Part of the Studies in the History of Law and Justice book series (SHLJ, volume 9)

This book compares the respective concepts of the law of nations put forward by the Spanish theologian Francisco Suárez and by the Dutch jurist Hugo Grotius. This comparison is based on the fact that both thinkers developed quite similar notions and were the first to depart from the Roman conception, which persisted throughout the entire Middle Ages and the early Renaissance. In Rome, jus gentium was a law that applied to foreigners within the Empire, and one which was often mistaken for Natural Law itself. These two features can be found even in the works of writers such as Francisco de Vitória and Alberico Gentili.

In Suárez and Grotius, the law of nations is applicable to an extra-national domain and inarguably becomes positive law. Yet, it also contains an ethical element that prevents it from transforming into a mere reflection of state interests.

This work argues that this resemblance is hardly a coincidence: Grotius has read Suárez, and that influence has modified the foundations of his early thoughts on jus gentium. This should not be taken to imply that the Dutch jurist wasn’t original: in both authors, the definition of the law of nations pursues his own internal logic. Nevertheless, Suárez’s oeuvre allowed Grotius to solve a fundamental problem touched on in his early writings that had remained unanswered. Accordingly, his oeuvre promises to clarify one of the most significant moments in the History of International Law.