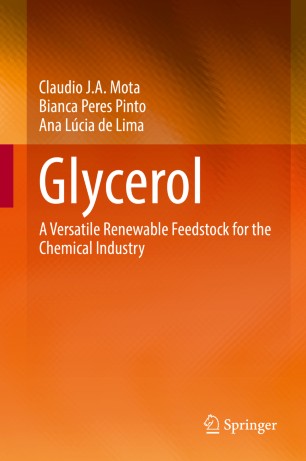 A Versatile Renewable Feedstock for the Chemical Industry

This book is aimed at providing a concise discussion on the use of glycerol as a renewable raw material for the chemical industry. With the increasing use of biodiesel produced from oils and fats, there is a surplus of glycerol in the world. This abundant and rather cheap raw material can be transformed in commodities and specialty chemicals, as well as in fuels. The book describes the main processes of chemical transformation of glycerol, highlighting those that are currently in commercial use and pointing out potential processes to be used in the future.

The first chapter introduces the concept of biofuel and briefly describes the production of biodiesel. It also highlights glycerol as the main byproduct of biodiesel synthesis and presents some numbers regarding the world production of glycerol. The second chapter shows the common uses of glycerol and addresses the point whether or not they can drain the large amounts of glycerol produced from biodiesel. The chapter addresses pros and cons of each use. The third chapter covers the main biotechnological processes of glycerol transformation. The fourth chapter thoroughly describes the main thermochemical processes to transform glycerol into commodities, products that will be further used in the chemical industry to produce polymers, for instance. The fifth chapter covers the production of glycerol derivatives of high added-value. The sixth chapter addresses the use of glycerol in the context of a biorefinery. The main idea is to show that many of the processes described in the previous chapters could be entirely green, using exclusively renewable raw materials.

1. Prof. Dr. Claudio J. A. Mota was born in Rio de Janeiro, Brazil, and graduated in Chemical Engineering at the Federal University of Rio de Janeiro, where he also obtained his doctoral degree in Chemistry. He worked in the Petrobras Research Center for 11 years carrying out researches on catalysis. In 1997 he moved to the Institute of Chemistry of the Federal University of Rio de Janeiro, where he is presently Full Professor of Chemistry and Chemical Engineering. He has been as invited professor in the University of Strasbourg, France, and in the year 2000 he won the Third World Academy of Science (TWAS) Award, sponsored by the Mexican Academy of Science, for the his collaboration with Mexican scientists. In 2007 he received the Technology Award from the Brazilian Chemical Industry Association (ABIQUIM) and in 2011 the Innovation Award of the Brazilian Chemical Society for his work on biomass transformation. He participates in the Brazilian Biodiesel Technology Network of the Ministry of Science and Technology, as one of the coordinators of glycerin conversion and is a member of the subcommittee on green chemistry for IUPAC. He is author and co-author of over 100 scientific articles and 12 patents.

3. Prof. Ana Lucia de Lima received her BA degree in Chemical Sciences (2011) from the Federal University of Uberlândia (UFU), Brazil. She received her MSc (2013) degree from Federal University of Rio de Janeiro (UFRJ), Brazil. Currently she is pursuing her PhD in Chemistry at UFRJ under supervision of Prof. Cláudio J. A. Mota and Prof. Célia M. Ronconi. Her research work is focused on catalysis, biofuel and synthesis of hybrid materials. She is also a temporary Lecturer at the Department of Analytical Chemistry at UFRJ.

Selected by Choice magazine as an Outstanding Academic Title for 2018

“It is hard to deny the value in this elegantly conceived small monograph dedicated to glycerol—that behemoth of the chemical process and product industry. … The 253 references are current through 2016; tables, schematics and illustrations are adequate and useful. This work is very nice!  It is most appropriate for chemists and technologists alike, especially specialists. Summing up: Highly recommended, Upper-division undergraduates and above; faculty and professionals.” (L. W. Fine, Choice, Vol. 55 (7), March, 2018)
Buy options