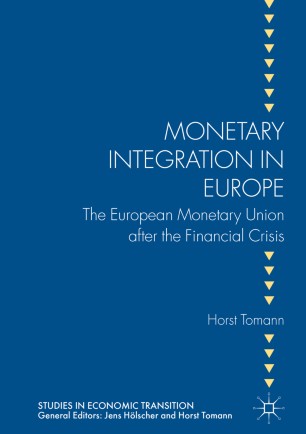 The European Monetary Union after the Financial Crisis

This book provides a fully revised and up-to-date analysis of the Economic and Monetary Union (EMU). With four entirely new chapters on responses to the financial crisis and the debate on reform options, Tomann assesses the EMU in comparison with other currency regimes through the adoption of a historical analysis. The book discusses in detail basic issues with currency and comprehensively analyzes monetary policy, highlighting problems of policy coordination. Tomann explores new monetary institutions that have been established in response to the financial crisis, before addressing long-term issues and reviewing reform proposals. By focusing on monetary issues the book offers a better understanding of macroeconomic policies and international policy cooperation, and, by extension, provides a thorough economic assessment of the EMU as an institution as it stands today.

Horst Tomann is Professor Emeritus at Freie University Berlin, Germany. He previously held the Jean Monnet Professorship for European Economic Policy at Freie University and was a staff member at the German Council of Economic Experts. He has had several appointments as Visiting Professor, among others at the University of Pennsylvania (Wharton School), USA, and the University of Birmingham, UK. He is the co-editor of Palgrave Macmillan’s book series Studies in Economic Transition, and the Palgrave Dictionary of Emerging Markets and Transition Economics, both alongside Jens Hӧlscher.