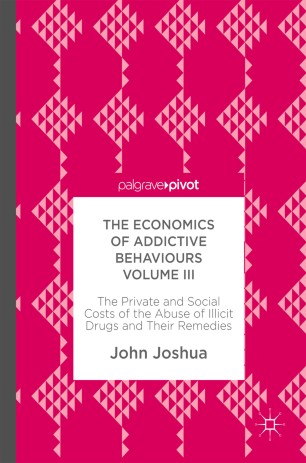 This title offers an in-depth analysis of the causes, consequences and treatments of illicit drug abuse. The author examines the effects of existing drug policies and proposes drug use legalisation within a regulated market as a viable alternative. Joshua assesses the factors that make individuals vulnerable to drug abuse and the pathways they may follow. As well as exploring the physical and psychological effects on the individual, Joshua examines the social and economic consequences for society. He highlights the pitfalls of a purely legal approach to drug abuse, which is primarily a health matter, and questions whether special drugs courts could be used as an alternative to the present criminal justice system. This book adds to the debate on whether most drugs could be sold in a regulated market in the same way as other drugs are, such as alcohol or nicotine.

This is the third title in a four volume series ‘The Economics of Addictive Behaviours’, consisting of three additional volumes on smoking, alcohol abuse and overeating.

John Joshua taught Economics to undergraduates and postgraduates in Melbourne, Australia, and China for many years. He holds PhDs in Sociology, Education and Economics, and his research interests are in the economic, educational, and psycho-social transformation of developing economies.