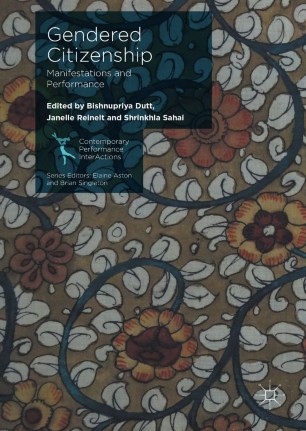 This book explores how citizenship is differently gendered and performed across national and regional boundaries. Using ‘citizenship’ as its organizing concept, it is a collection of multidisciplinary approaches to legal, socio-cultural and performative aspects of gender construction and identity: violence against women, victimhood and agency, and everyday issues of socialization in a globalized world. It brings together scholars of politics, media, and performance who are committed to dialogue across both nation and discipline.
This study is the culmination of a two-year project on the topic of 'Gendered Citizenship', arising from an international collaboration that has sought to develop a comparative and yet singular perspective on performance in relation to key political themes facing our countries of origin in the early decades of this century. The research is interdisciplinary and multinational, drawing on Indian, European, and North and South American contexts.

Bishnupriya Dutt is Professor and Dean in the School of Arts and Aesthetics at Jawaharlal Nehru University, India, and serves on the executive committee of IFTR.

Janelle Reinelt is Emeritus Professor at the University of Warwick, UK, and former President of IFTR.

Shrinkhla Sahai is completing her PhD at Jawaharlal Nehru University, India, and is an independent media critic, radio professional and dancer in Delhi.