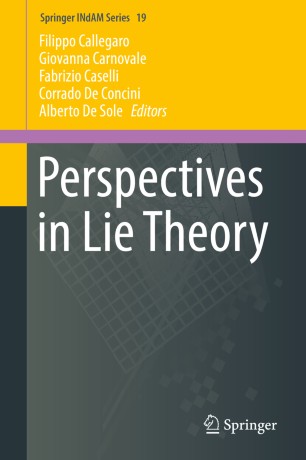 Lie theory is a mathematical framework for encoding the concept of symmetries of a problem, and was the central theme of an INdAM intensive research period at the Centro de Giorgi in Pisa, Italy, in the academic year 2014-2015. This book gathers the key outcomes of this period, addressing topics such as: structure and representation theory of vertex algebras, Lie algebras and superalgebras, as well as hyperplane arrangements with different approaches, ranging from geometry and topology to combinatorics.

​Filippo Callegaro received his PhD in Mathematics from the Scuola Normale Superiore of Pisa in 2007 under the direction of Mario Salvetti.  In 2008 he took on a teaching position at the Scuola Normale, before moving to the University of Pisa in 2013. His work focuses on the topology of configuration spaces, cohomology of braid groups and generalizations, and hyperplane and toric arrangements.

Giovanna Carnovale received her PhD from the University of Utrecht in 1999 under the direction of Tom Koornwinder. She has held post-doc positions in Cergy-Pontoise, Paris VI, Antwerp, and Rome Tor Vergata. In 2001 she took on a position in Padua, where she has been an associate professor since 2015. Her research interests are in algebra, especially Lie theory, Hopf algebra theory, and representation theory, as well as their the interplay with geometry.

Fabrizio Caselli received his PhD from the Università di Roma La Sapienza in 2003 under the direction of Francesco Brenti. He has held post-doc positions in Lyon and Rome. In 2006 he took on a position in Bologna, where he has been an associate professor since 2014. His main research interests are in algebra and combinatorics, in particular Kazhdan-Luszig theory, Coxeter groups, complex reflection groups and their representations.

Corrado De Concini received his PhD in Mathematics from the University of Warwick in 1975 under the direction of George Lusztig. He has been a professor of mathematics since 1983. Since 1996 he has been a professor at the University of Roma, La Sapienza. He has been a visiting researcher at numerous institutes, including Brandeis University, Mittag Leffler Institute, Tata Institute of Fundamental Research, Harvard University, and MIT. He serves on the editorial boards of Rendiconti Accademia Nazionale dei Lincei, Journal of Transformation Groups, IMRN, Rendiconti di Matematica, Rendiconti del Seminario Matematico-Padova, and Communications in Contemporary Mathematics. In addition, he has made valuable contributions in several areas of algebra and algebraic geometry, including invariant theory, commutative algebra, algebraic and quantic group theory, the Schottky problem, and hyperplane arrangements.

Alberto De Sole received his PhD in Mathematics from the Massachusetts Institute of Technology in 2003 under the supervision of Victor Kac. He has been a B.P. assistant professor at Harvard University’s Department of Mathematics, a researcher at the Department of Mathematics of the University of Rome La Sapienza, and, since 2012, an associate professor at the same University. He has been a visiting researcher at MIT (Boston), IHP (Paris), IHES (Bure sur Yvette, France), and ESI (Vienna). His primary research interests are in algebra, particularly Lie theory, vertex algebras, W-algebras, and their applications, as well as statistical mechanics in physics.