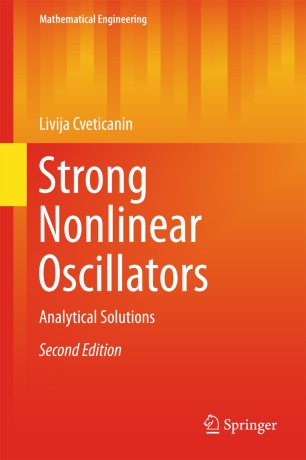 Besides the oscillators with one degree-of-freedom, the one and two mass oscillatory systems with two-degrees-of-freedom and continuous oscillators are considered. The chaos and chaos suppression in ideal and non-ideal mechanical systems is explained.

In this second edition more attention is given to the application of the suggested methodologies and obtained results to some practical problems in physics, mechanics, electronics and biomechanics. Thus, for the oscillator with two degrees-of-freedom, a generalization of the solving procedure is performed. Based on the obtained results, vibrations of the vocal cord are analyzed. In the book the vibration of the axially purely nonlinear rod as a continuous system is investigated. The developed solving procedure and the solutions are applied to discuss the muscle vibration. Vibrations of an optomechanical system are analyzed using the oscillations of an oscillator with odd or even quadratic nonlinearities. The extension of the forced vibrations of the system is realized by introducing the Ateb periodic excitation force which is the series of a trigonometric function.

The book is self-consistent and suitable for researchers and as a textbook for students and also professionals and engineers who apply these techniques to the field of nonlinear oscillations.