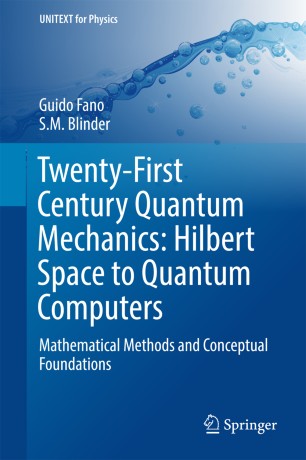 This book is designed to make accessible to nonspecialists the still evolving concepts of quantum mechanics and the terminology in which these are expressed. The opening chapters summarize elementary concepts of twentieth century quantum mechanics and describe the mathematical methods employed in the field, with clear explanation of, for example, Hilbert space, complex variables, complex vector spaces and Dirac notation, and the Heisenberg uncertainty principle. After detailed discussion of the Schrödinger equation, subsequent chapters focus on isotropic vectors, used to construct spinors, and on conceptual problems associated with measurement, superposition, and decoherence in quantum systems. Here, due attention is paid to Bell’s inequality and the possible existence of hidden variables. Finally, progression toward quantum computation is examined in detail: if quantum computers can be made practicable, enormous enhancements in computing power, artificial intelligence, and secure communication will result. This book will be of interest to a wide readership seeking to understand modern quantum mechanics and its potential applications.

Guido Fano graduated magna cum laude in Physics at the University of Rome in 1955 and earned university degrees in Theoretical Physics and Mathematical Methods of Physics. He taught at several universities, including Naples, Ferrara, Bologna, and Marseille, and progressed from being an assistant lecturer to senior lecturer and, finally, Professor of Mathematical Methods of Physics. Professor Fano is a specialist in the quantum many-body problem, with particular emphasis on the mathematical aspects. He is the author of about 60 publications in international journals as well as several textbooks. He is responsible for some particularly significant results concerning the existence problem for the time-dependent Hartree-Fock equations, the use of non-orthogonal orbitals in Quantum Chemistry, and the asymptotic behavior of the Taylor expansion coefficients of some sequences of polynomials.  Seymour M. Blinder is Professor Emeritus of Chemistry and Physics at the University of Michigan, Ann Arbor, USA. He completed his PhD at Harvard University in 1958, under the supervision of Profs. W.E. Moffitt and J.H. Van Vleck (Nobel Prize in Physics, 1977). Professor Blinder has published more than 200 publications in both Theoretical Chemistry and Mathematical Physics. He was the first to derive a closed-form expression for the Feynman path-integral propagator for the Coulomb problem (the hydrogen atom). He is the author of several books and monographs. Professor Blinder is currently a telecommuting Senior Scientist for Wolfram Research (the developers of Mathematica and other scientific software).

“I agree with the authors that this is the excellent introductory book for non-specialists to quantum theory, though I would recommend it to all curious researchers whose perception of the world that surrounds us raises the questions of what, why and how is out there?” (Eugene Kryachko, zbMATH 1377.81005, 2018)
Buy options