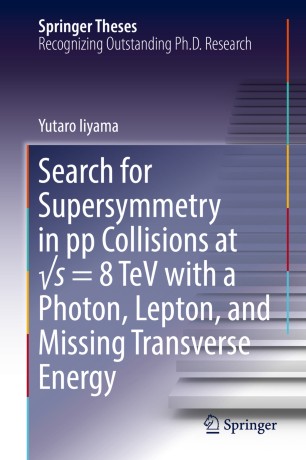 Search for Supersymmetry in pp Collisions at √s = 8 TeV with a Photon, Lepton, and Missing Transverse Energy

This Ph.D. thesis is a search for physics beyond the standard model (SM) of particle physics, which successfully describes the interactions and properties of all known elementary particles. However, no particle exists in the SM that can account for the dark matter, which makes up about one quarter of the energy-mass content of the universe. Understanding the nature of dark matter is one goal of the CERN Large Hadron Collider (LHC). The extension of the SM with supersymmetry (SUSY) is considered a promising possibilities to explain dark matter.
The nominated thesis describes a search for SUSY using data collected by the CMS experiment at the LHC. It utilizes a final state consisting of a photon, a lepton, and a large momentum imbalance probing a class of SUSY models that has not yet been studied extensively. The thesis stands out not only due to its content that is explained with clarity but also because the author performed more or less all aspects of the thesis analysis by himself, from data skimming to limit calculations, which is extremely rare, especially nowadays in the large LHC collaborations.

Yutaro Iiyama is an experimental particle physicist with a particular interest in search for unknown particles. He is a member of the CMS collaboration at the CERN Large Hadron Collider facility, which conducts proton-proton collision experiments at the energy frontier.
Dr. Iiyama earned his B.S. in physics from The University of Tokyo. He received his Ph.D. in physics from Carnegie Mellon University for his work on the search for supersymmetric particles under the supervision of Professor Manfred Paulini. He joined the Laboratory for Nuclear Science at Massachusetts Institute of Technology, and has been involved in searches for dark matter particles and in advancing computing technologies for particle physics.