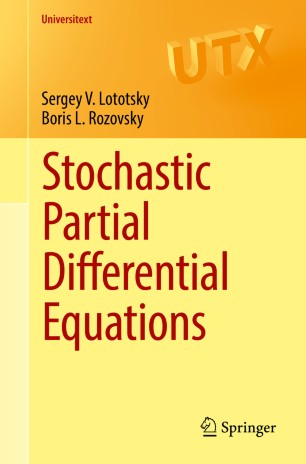 Taking readers with a basic knowledge of probability and real analysis to the frontiers of a very active research discipline, this textbook provides all the necessary background from functional analysis and the theory of PDEs. It covers the main types of equations (elliptic, hyperbolic and parabolic) and discusses different types of random forcing. The objective is to give the reader the necessary tools to understand the proofs of existing theorems about SPDEs (from other sources) and perhaps even to formulate and prove a few new ones. Most of the material could be covered in about 40 hours of lectures, as long as not too much time is spent on the general discussion of stochastic analysis in infinite dimensions.

As the subject of SPDEs is currently making the transition from the research level to that of a graduate or even undergraduate course, the book attempts to present enough exercise material to fill potential exams and homework assignments. Exercises appear throughout and are usually directly connected to the material discussed at a particular place in the text. The questions usually ask to verify something, so that the reader already knows the answer and, if pressed for time, can move on. Accordingly, no solutions are provided, but there are often hints on how to proceed.

The book will be of interest to everybody working in the area of stochastic analysis, from beginning graduate students to experts in the field.

Sergey Lototsky earned a Master’s degree in Physics in 1992 from the Moscow Institute of Physics and Technology, followed by a PhD in Applied Mathematics in 1996 from the University of Southern California. After a year-long post-doc at the Institute for Mathematics and its Applications and a three-year term as a Moore Instructor at MIT, he returned to the department of Mathematics at USC as a faculty member in 2000. He specializes in stochastic analysis, with emphasis on stochastic differential equations. He has supervised more than 10 PhD students and has held visiting positions at the Mittag-Leffler Institute in Sweden and at several universities in Israel and Italy.

“The objective of this textbook is to discuss as much of the SPDE-related material as possible without going too much into the details, and to prepare the reader for independent research in this area. … book contains a lot of exercises that are called problems, with subsequent discussion. The presentation is self-contained. In general, the book is beautifully presented and can be recommended for anybody who starts and continues with SPDEs, especially for undergraduate and postgraduate students, researchers and practitioners.” (Yuliya S. Mishura, zbMATH 1375.60010, 2018)
Buy options