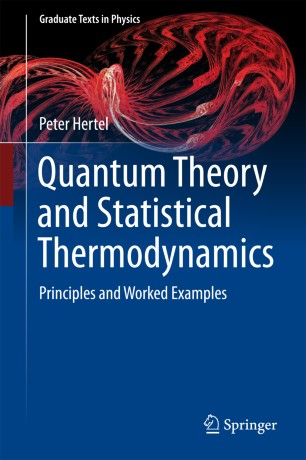 This textbook presents a concise yet detailed introduction to quantum physics. Concise, because it condenses the essentials to a few principles. Detailed, because these few principles –  necessarily rather abstract – are illustrated by several telling examples. A fairly complete overview of the conventional quantum mechanics curriculum is the primary focus, but the huge field of statistical thermodynamics is covered as well.

The text explains why a few key discoveries shattered the prevailing broadly accepted classical view of physics. First, matter appears to consist of particles which, when propagating, resemble waves. Consequently, some observable properties cannot be measured simultaneously with arbitrary precision. Second, events with single particles are not determined, but are more or less probable. The essence of this is that the observable properties of a physical system are to be represented by non-commuting mathematical objects instead of real numbers.

Chapters on exceptionally simple, but highly instructive examples illustrate this abstract formulation of quantum physics. The simplest atoms, ions, and molecules are explained, describing their interaction with electromagnetic radiation as well as the scattering of particles. A short introduction to many particle physics with an outlook on quantum fields follows. There is a chapter on maximally mixed states of very large systems, that is statistical thermodynamics. The following chapter on the linear response to perturbations provides a link to the material equations of continuum physics. Mathematical details which would hinder the flow of the main text have been deferred to an appendix.

The book addresses university students of physics and related fields. It will attract graduate students and professionals in particular who wish to systematize or refresh their knowledge of quantum physics when studying specialized texts on solid state and materials physics, advanced

optics, and other modern fields.

Prof. Dr. Peter Hertel studied physics, mathematics and philosophy at the universities of Hamburg (Germany), London (Imperial College, UK) and Vienna (Austria) where he received his Ph.D. His scientific career led him to Heidelberg (Germany), CERN (Geneva, Switzerland), Vienna and Osnabrück (Germany) where he was appointed full professor. Although retired by now, he continues lecturing at the Applied Physics School of Nankai University (Tianjin, China). His research interests were elementary particles, statistical thermodynamics, theoretical optics and computational physics. For more than 40 years he has taught practically all subjects of theoretical physics and mathematics at different levels

“The textbook is intended for students of general physics, chemistry, molecular biology, material science and even for philosophical minded readers. … The many worked examples are presented at various levels of abstraction.” (Vladimir Dzhunushaliev, zbMATH 1379.81009, 2018)
Buy options