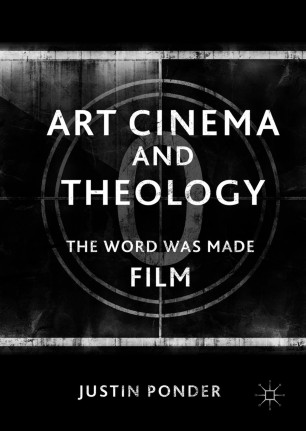 The Word Was Made Film

This book examines postmodern theology and how it relates to the cinematic style of Robert Bresson, Carl Theodor Dreyer, Ingmar Bergman, and Luis Buñuel. Ponder demonstrates how these filmmakers forefront religious issues in their use of mise en scène. He investigates both the technical qualities of film “flesh” and its theological features. The chapters show how art cinema uses sound, editing, lighting, and close-ups in ways that critique doctrine’s authoritarianism, as well as philosophy’s individualism, to suggest postmodern theologies that emphasize community. Through this book we learn how the cinematic style of modernist auteurs relates to postmodern theology and how the industry of art cinema constructs certain kinds of film-watching subjectivity.

Justin Ponder is Associate Professor of English at Marian University, USA. He has written on theology and film in the Journal of Religion and Film, Religion and the Arts, and Imaginatio et Ratio.

“While others have called for informed dialogue between film studies and theology, Ponder goes further in modelling detailed study of four aspects of filmmaking connected to four auteurs hailed by cineastes as well as theologians. He shows how their distinctive techniques support a postmodern theology in which meaning is found only in community, and in the process indicates with detail and insight how film technique serves content and not only form.” (John Lyden, editor of Journal of Religion & Film and author of Film as Religion: Myths, Morals, and Rituals, 2003)

“In Ponder's unpacking of a film's narrative features, his exploration of the movie's visual/aural elements (sound, editing, lighting, and cinematography) is superb, as is his wide-ranging theological investigations, helping to illumine the film's theological depths. His thesis, that a film's sound and images complicate/nuance/deepen its narrative meaning and can be enriched by the parallel use of theological criticism as an alternate form of "critical theory" is provocative.” (Robert K. Johnston, Professor of Theology and Culture, Fuller Theological Seminary, USA. Author of Reel Spirituality, 2006, Useless Beauty: Ecclesiastes through the Lens of Contemporary Film, 2004; co-editor of God in the Movies, 2017)