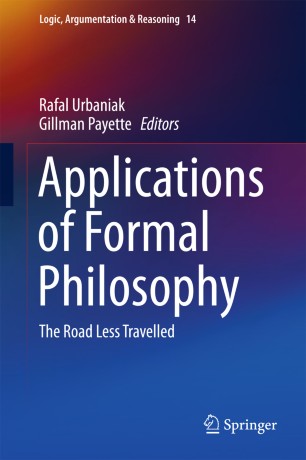 This book features mathematical and formal philosophers’ efforts to understand philosophical questions using mathematical techniques. It offers a collection of works from leading researchers in the area, who discuss some of the most fascinating ways formal methods are now being applied. It covers topics such as: the uses of probable and statistical reasoning, rational choice theory, reasoning in the environmental sciences, reasoning about laws and changes of rules, and reasoning about collective decision procedures as well as about action. Utilizing mathematical techniques has been very fruitful in the traditional domains of formal philosophy – logic, philosophy of mathematics and metaphysics – while formal philosophy is simultaneously branching out into other areas in philosophy and the social sciences. These areas particularly include ethics, political science, and the methodology of the natural and social sciences. Reasoning about legal rules, collective decision-making procedures, and rational choices are of interest to all those engaged in legal theory, political science and economics. Statistical reasoning is also of interest to political scientists and economists.

Rafal Urbaniak completed his PhD in Logic and Philosophy of Mathematics at the University of Calgary (working with Prof. R. Zach) in 2008, focusing on the development of Lesniewski’s foundations of mathematics. Currently, he is a postdoctoral fellow of the Research Foundation Flanders at the Centre for Logic and Philosophy of Science at Ghent University in Belgium and an Associate Professor at the Department of Philosophy, Sociology and Journalism at the University of Gdansk in Poland.

Rafal Urbaniak is mostly interested in applications of formal methods to philosophical problems, such as those related to theories of rationality, belief revision, philosophy of mathematics, philosophy of mind, theories of conditionals or philosophy of thought experiments. Nowadays, his main research project pertains to the use of probabilistic methods in juridicial fact-finding. More details and papers are available at http://ugent.academia.edu/RafalUrbaniakGillman Payette is a researcher at the Canadian Centre for Advanced Leadership in Business at the University of Calgary, and an honorary postdoctoral fellow at the University of British Columbia. Previously, he was a Banting postdoctoral fellow at the University of British Columbia from 2014 to 2016, and before that a Killam Postdoctoral Fellow at Dalhousie University. He graduated from the University of Calgary in 2012 under the supervision of Richard Zach with a dissertation on STIT based formal logics for institutions, and is a two time winner of the Governor General of Canada's Academic Gold Medal. His current research interests are in applications of logic and mathematical methods to ethics & political philosophy, and the philosophy of logic. His previous publications concern paraconsistent inference relations, modal logics of agency and time and logical pluralism/foundations of consequence. Versions of his papers can be found on http://dal.academia.edu/GillmanPayette.