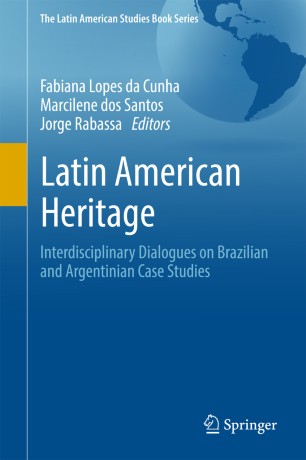 Focusing on Brazil, this book approaches the term “heritage” from not only a historical and architectural point of view, but also considers its artistic, archaeological, natural, ethnological and industrial aspects.

The book is divided into four thematic sections – 1) traditions and intangible heritage, 2) archaeological heritage, 3) natural heritage and landscapes, and 4) heritage of industrial and built environments – and presents chapters on a diverse range of topics, from samba and cultural identities in Rio de Janeiro, to the history of Brazilian archaeology, the value of scenic landscapes in Brazil, and the cultural landscape of Brazil.

As an outcome of the First Heritage International Symposium, this unique book explores a variety of heritage dialogues, pursuing global and specific approaches, and combining different views, perceptions and senses.

Fabiana Lopes da Cunha received her Bachelor’s degree in History from São Paulo University (USP), where she also obtained her Ph.D. degree in Social History. She is Associate Professor at São Paulo State University (UNESP), Brazil and Professor at Postgraduate Program from School of Sciences, Humanities and Languages, Assis (SP) - São Paulo State University (UNESP). She also coordinates a Documentation and Memory Center (CEDOM) which aims include regional memory and local preservation. Her main research interests include Brazilian History, Cultural History during the imperial and republican period until the end of the New State, as well as Popular Music, Popular Culture (festivals), Contemporary Culture Production, Museums, Diaspora and Intangible Heritage, and Carnival. In 2004 she edited her first book Da Marginalidade ao Estrelato: o samba na construção da nacionalidade (1917-1945) (Annablume, 2004). She was an adviser at CONDEPHAAT

Jorge Rabassa obtained his Licenciado and Doctor degrees in Geology at the School of Natural Sciences, Universidad Nacional de La Plata, La Plata, Argentina. He is a researcher with CONICET, the National Research Council of Argentina, at CADIC, Centro Austral de Investigaciones Científicas, Ushuaia, Tierra del Fuego, since 1986. He is presently the director of CADIC, the southernmost, multidisciplinary research center of the World with permanent scientific staff. He is also adjunct Full Professor of Geology at the Universidad Nacional de Tierra del Fuego. He has been a lecturer in several Argentine universities and also the President of Comahue University, one of the Argentine Patagonian universities. He is a member of the Argentine Academy of Sciences and a corresponding member of the Catalonian Academy of Sciences. He has been a Visiting Professor in several universities of the United States and Canada, as well as in various Western Europe countries, the Republic of South Africa and China. His main research interests are geomorphology, ancient landscapes, long-term landscape evolution, and glacial and Quaternary studies. He has published over 150 scientific papers and book chapters, and edited 17 books and scientific journal special volumes.

He has directed 15 doctoral dissertations and many graduation theses and is a member of the editorial board of several international journals. He is presently the co-editor for South America of the Springer Briefs in Earth System Sciences series and also President of the Asociación Argentina de Geomorfología y Cuaternario until 2018.

“Who decides what is memorable and what is worthy of preserving for a nation's self-understanding? Whose memory should be celebrated and whose forgotten? These are the questions posed in this challenging collection of 14 essays resulting from the First International Symposium on Heritage, held in 2015 in Ourinhos, Brazil. … Summing Up: Highly recommended. Upper-division undergraduates and above.” (R. M. Delson, Choice, Vol. 55 (6), February, 2018)
Buy options