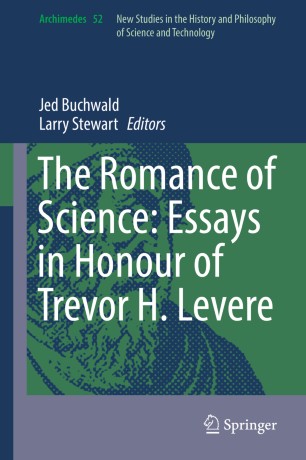 The Romance of Science pays tribute to the wide-ranging and highly influential work of Trevor Levere, historian of science and author of Poetry Realised in Nature, Transforming Matter, Science and the Canadian Arctic, Affinity and Matter and other significant inquiries in the history of modern science. Expanding on Levere’s many themes and interests, The Romance of Science assembles historians of science -- all influenced by Levere's work -- to explore such matters as the place and space of instruments in science, the role and meaning of science museums, poetry in nature, chemical warfare and warfare in nature, science in Canada and the Arctic, Romanticism, aesthetics and morals in natural philosophy, and the “dismal science” of economics. The Romance of Science explores the interactions between science's romantic, material, institutional and economic engagements with Nature.

Jed Buchwald is Doris and Henry Dreyfuss Professor of History at Caltech and is finishing a book on the decipherment of Egyptian hieroglyphs. His most recent publications are The Zodiac of Paris (Princeton, 2010, co-author Diane Greco Josefowicz), Isaac Newton and the Origin of Civilization (Princeton, 2012, co-author Mordechai Feingold), and “Kirchhoff’s theory for optical diffraction” (Archive for History of Exact Sciences, 70 (2016):464-511, co-author Chen-Pang Yeang).
Larry Stewart is Professor of History at the University of Saskatchewan and is currently writing a study of experiment during the late Enlightenment and first industrial revolution.  His most recent work, edited with Erika Dyck, is The Uses of Humans in Experiment. Perspectives from the 17th to the 20th Century (Brill/Rodopi, 2016).