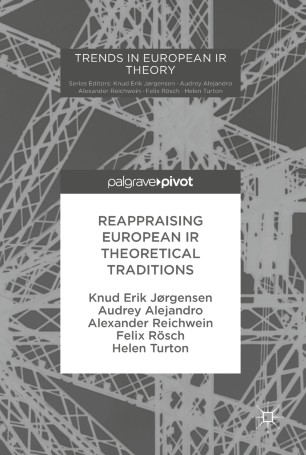 This book is about European IR theoretical traditions, their origins, and key figures. Theorizing is among the most important activities that take place within scientific disciplines. Scholars therefore routinely talk/debate about the discipline of IR and its theories, theories are often used to form the pedagogical backbone of IR and theories are also a key part of scholarly identities. Over time, theories crystalize in to schools of thought, strands of theorizing and theoretical traditions. This book and the volumes that will follow focus on the origins and trajectories of theoretical traditions, and key figures of IR thought in Europe in the 20th Century. The authors are situated in Europe, and it is thus the origins and trajectories of European theoretical traditions, its intellectual history and contemporary forms of theoretical knowledge today, that are on the agenda. In order to achieve this ambitious aim, we opt for a transnational sociological history approach, thus going beyond the national lens through which IR has been predominantly studied. The series will have an integrative function and contribute to a globalized discourse on IR as a discipline. The key benefits of this first volume is that it outlines IR theoretical traditions for the first time ever, provides a novel framework for exploring IR’s theories, and contributes to define and strengthen the European identity of IR. This book is an invaluable resource for scholars of IR.

Audrey Alejandro is Lecturer in Politics and International Relations at Queen Mary University of London.

Alexander Reichwein is Senior Lecturer and PostDoc in International Relations at the Justus-Liebig University in Giessen, Germany.

Helen Turton is a Lecturer in International Relations at the University of Sheffield, UK.

“REIRTT serves as an excellent primer on key debates and as a brief standalone volume works well as a snapshot of where we are in disciplinary terms. … it will hopefully provide a solid foundation for the rest of the series and allow it to become a substantial contribution to the dialogue on a more global IR. It certainly leaves the reader wanting more – which, given its aims as an invitation to further debate, is perhaps entirely fitting.” (Ben Willis, Global Affairs, October 8, 2018)