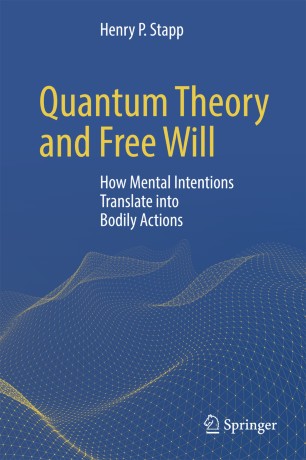 Quantum Theory and Free Will

This book explains, in simple but accurate terms, how orthodox quantum mechanics works. The author, a distinguished theoretical physicist, shows how this theory, realistically interpreted, assigns an important role to our conscious free choices. Stapp claims that mainstream biology and neuroscience, despite nearly a century of quantum physics, still stick essentially to failed classical precepts in which mental intentions have no effect upon our bodily actions. He shows how quantum mechanics provides a rational basis for a better understanding of this connection, even allowing an explanation of certain phenomena currently held to be “paranormal”. These ideas have major implications for our understanding of ourselves and our mental processes, and thus also for the meaningfulness of our lives.

Henry Pierce Stapp is an American mathematical physicist who worked closely with Werner Heisenberg, Wolfgang Pauli, and J.A. Wheeler. He is known for his work in quantum mechanics, particularly the development of axiomatic S-matrix theory, the proofs of strong nonlocality properties, and the place of free will in the "orthodox" quantum mechanics of John von Neumann. Dr. Stapp has published many papers pertaining to the non-local aspects of quantum mechanics and Bell's theorem, as well as two books published by Springer.