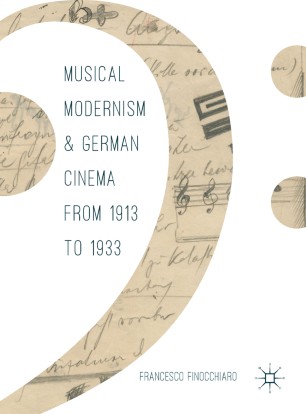 This book investigates the relationship between musical Modernism and German cinema. It paves the way for anunorthodox path of research, one which has been little explored up until now. The main figures of musical Modernism, from Alban Berg to Paul Hindemith, and from Richard Strauss to Kurt Weill, actually had a significant relationship with cinema. True, it was a complex and contradictory relationship in which cinema often emerged more as an aesthetic point of reference than an objective reality; nonetheless, the reception of the language and aesthetic of cinema had significant influence on the domain of music. Between 1913 and 1933, Modernist composers’ exploration of cinema reached such a degree of pervasiveness and consistency as to become a true aesthetic paradigm, a paradigm that sat at the very heart of  the Modernist project. In this insightful volume, Finocchiaro shows that the creative confrontation with the avant-garde medium par excellence can be regarded as a vector of musical Modernism: a new aesthetic paradigm for the very process – of deliberate misinterpretation, creative revisionism, and sometimes even intentional subversion of the Classic-Romantic tradition – which realized the “dream of Otherness” of the Modernist generation.