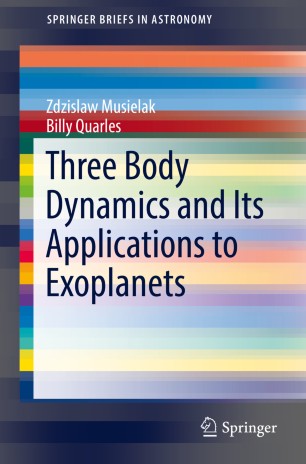 Three Body Dynamics and Its Applications to Exoplanets

This brief book provides an overview of the gravitational orbital evolution of few-body systems, in particular those consisting of three bodies. The authors present the historical context that begins with the origin of the problem as defined by Newton, which was followed up by Euler, Lagrange, Laplace, and many others.  Additionally, they consider the modern works from the 20th and 21st centuries that describe the development of powerful analytical methods by Poincare and others.  The development of numerical tools, including modern symplectic methods, are presented as they pertain to the identification of short-term chaos and long term integrations of the orbits of many astronomical architectures such as stellar triples, planets in binaries, and single stars that host multiple exoplanets. The book includes some of the latest discoveries from the Kepler and now K2 missions, as well as applications to exoplanets discovered via the radial velocity method. Specifically, the authors give a unique perspective in relation to the discovery of planets in binary star systems and the current search for extrasolar moons.