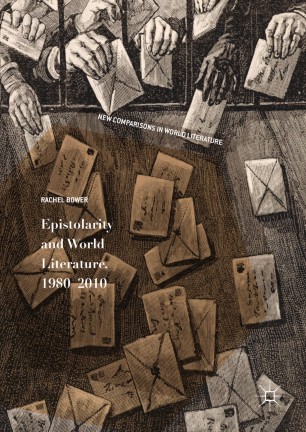 ‘This book, like the literary letters it examines, is intelligently attuned to the intimate to-and-fro between author and reader, in particular what happens when this dialogue takes place across fraught historical and political lines. Addressing why novelists from across the world returned to the epistolary form at the end of the long twentieth century, Bower closely analyses an impressive range of authors to show how and why words travel from I to you.’

‘This lucid and original book explores the relationships between the epistolary novel, the world and postcolonial literature with a keen, critical eye and a nuanced concern for the material productions of texts, focusing on detailed readings as well as a wider global background. In doing so, Bower both reviews and reforms part of the field, and so this book should be read by those with an interest in the contemporary novel, postcolonialism and literary theory more generally.’

This book examines the striking resurgence of the literary letter at the end of the long twentieth century. It explores how authors returned to epistolary conventions to create dialogue across national, linguistic and cultural borders and repositions a range of contemporary and postcolonial authors never considered together before, including Monica Ali, John Berger, Amitav Ghosh, Michael Ondaatje and Alice Walker. Through a series of situated readings, the book shows how the return to epistolarity is underpinned by ideals relating to dialogue and human connection. Several of the works use letters to present non-anglophone material to the anglophone reader. Others use letters to challenge policed borders: the prison, occupied territory, the nation state. Elsewhere, letters are used to connect correspondents in different cultural and linguistic contexts. Common to all of the works considered in this book is the appeal that they make to us, as readers, and the responsibility they place on us to respond to this address.
By taking the epistle as its starting point and pursuing Auerbach’s speculative ideal of weltliteratur, this book turns away from the dominant trend of ‘distant reading’ in world literature, and shows that it is in the close situated analysis of form and composition that the concept of world literature emerges most clearly. This study seeks to re-think the ways in which we read world literature and shows how the literary letter, in old and new forms, speaks powerfully again in this period.

Rachel Bower is Leverhulme Early Career Research Fellow at the University of Leeds, UK. She is currently writing a book entitled Transcultural Collaboration: Poets of Leeds and Nigeria Unite, 1950-1970. She has a PhD from the University of Cambridge. She writes regularly for academic journals and magazines and publishes her poetry widely. She is currently co-editing a Special Issue of English Studies on Tony Harrison with Jacob Blakesely, and co-ediitng a poetry anthology with Helen Mort (Moons on Glass, 2017).

“Rachel Bower’s Epistolarity and World Literature maintains a sustained focus on the resurgence of epistolary elements in recent Anglophone fiction. This turns out to be a remarkably productive methodological choice. … The book is a masterful performance of comparative generosity, a generosity it shares with the some of the best world literature scholarship out there, or indeed with the cosmopolitan intellectual tradition the field updates.” (Pieter Vermeulen, English Studies, November 27, 2018)
Buy options