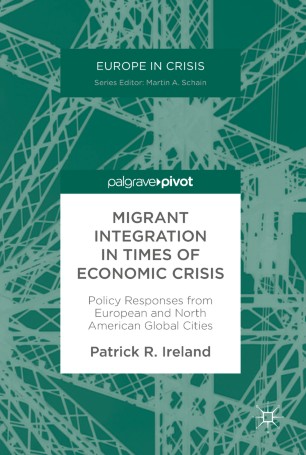 Part of the Europe in Crisis book series (EIC)

This book examines how the severe economic downturn following the 2007-2008 financial crisis affected the structural integration and quality of life of urban migrants in Europe and North America. It compares the experiences of migrants from Poland, Romania, Serbia, Pakistan, and Ghana in five similar, secondary global cities of Hamburg (Germany), Barcelona (Spain), Chicago (USA), Toronto (Ontario, Canada), and Montréal (Québec, Canada) over the period of 2000-2015. The work uses statistical analysis to gauge changes in residential segregation and structural integration (such as unemployment, poverty, and social assistance rates). It then provides qualitative analyses of individual city neighborhoods where the target migrant groups have settled, exploring each community's unique evolution and the ambivalent impact that local policy responses have had on their quality of life. With this study, researchers, instructors, students, and policymakers with an interest in migration, urban development, and global cities will be far more knowledgeable of both the potential and limits of policy efforts.

Patrick R. Ireland is Professor of Political Science at the Illinois Institute of Technology in Chicago, USA. He has written extensively on urban-level migrant integration in Europe, North America, and Africa; female migrant domestic workers; and migrant health. His publications include The Policy Challenge of Ethnic Diversity (1994) and Becoming Europe: Immigration, Integration, and the Welfare State (2004), as well as many peer-reviewed journal articles and book chapters.