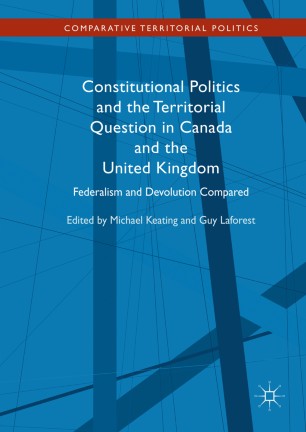 This book compares the constitutional politics in Canada and the United Kingdom – two complex, multilevel, plurinational states. While the former is federal and the latter a devolved state, the logic of both systems is similar: to combine unity with diversity. Both are facing similar challenges in a world marked by spatial rescaling, international interdependence and economic and social change. The contributors chart these challenges and the responses of the two countries, covering the meanings of federalism and devolution; the role of the courts; fiscal equalization; welfare; party politics; reform by popular referendum and citizen assemblies; and intergovernmental relations. The book will be of interest to students of federalism and multilevel government, state transformation territorial politics on both sides of the Atlantic.

Michael Keating is Professor of Politics at the University of Aberdeen, UK, and Director of the Centre on Constitutional Change. He has taught at universities in Canada and the UK as well as the USA, Spain, Italy and France.  He is a Fellow of the Royal Society of Edinburgh, the British Academy, the Academy of Social Science and the European Academy.

Guy Laforest is Professor of Political Science at Université Laval, in Québec City, Québec, Canada. He has taught at universities across Canada, in the United States and in Spain. He is a Fellow of the Royal Society of Canada and President of the Humanities and Social Sciences Federation of Canada.