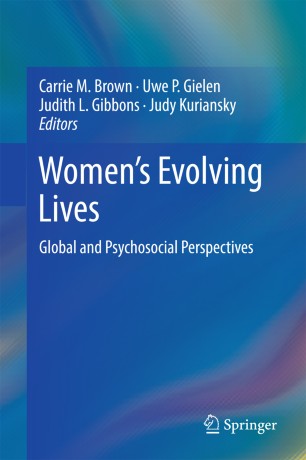 This wide-ranging collection analyzes the status and advancement of women both in a national context and collectively on a global scale, as a powerful social force in a rapidly evolving world. The countries studied—China, India, Indonesia, Iran, Egypt, Cameroon, South Africa, Italy, France, Brazil, Belize, Mexico, and the United States—represent a cross-section of economic conditions, cultural and religious traditions, political realities, and social contexts that shape women’s lives, challenges, and opportunities. Psychological and human rights perspectives highlight worldwide goals for equality and empowerment, with implications for today’s girls as they become the next generation of women. Throughout these chapters, women’s lived experience is compared and contrasted in such critical areas as:

Women's Evolving Lives is a forward-facing reference for psychology professionals of varied disciplines, as well as for colleagues in other fields, including women’s and gender studies, sociology, anthropology, international studies, and education. The wide scope of concerns also makes this anthology relevant and instructive to readers in diverse non-academic settings.

Carrie M. Brown received her Ph.D. in experimental psychology (developmental concentration), with a minor in research methodology, from Saint Louis University. From 2011-2015, she served as Assistant Professor of Psychology at Agnes Scott College – a women’s college in Decatur, Georgia where she was the head of the Race, Ethnicity, and Culture Lab. Currently the Secretary of the Society for Cross-Cultural Research, she has been an author of over 35 papers and posters that have been presented at conferences both in the United States and other parts of the world. Her research interests include racial and ethnic socialization, racial and ethnic identity, acculturation, and interpersonal acceptance and rejection. With Karen Ripoll-Nunez and Anna Laura Comunian, she edited Expanding Horizons: Current Research on Interpersonal Acceptance: Selected Papers from the Third International Congress on Interpersonal Acceptance and Rejection (2012).
Uwe P. Gielen received his Ph.D. in social psychology from Harvard University.  His work has centered on international family psychology, cross-cultural studies of human development, international psychology, and gender roles in Tibetan societies. He is Professor-Emeritus of Psychology and Founding Director of the Institute for International and Cross-Cultural Psychology at St. Francis College as well as a past chair of the Psychology Steering Committee of the New York Academy of Sciences. A former president of the Society for Cross-Cultural Research, the International Psychology Division of the American Psychological Association, and the International Council of Psychologists, he has edited, co-edited, and co-authored 22 volumes concerned with cross-cultural and international psychology. The volumes include Families in Global Perspective (2005), International Approaches to the Family and Family Therapy (1999), Childhood and Adolescence: Cross-Cultural Perspectives and Applications (2004, 2nd ed. in press), Toward a Global Psychology (2007), Handbook of Counseling and Psychotherapy in an International Context (2013), and Pathfinders in International Psychology (2015). He contributed a chapter on “Gender Roles in Tibetan Societies” (1993) to Leonore L. Adler’s Handbook on Gender Roles.
Judith L. Gibbons received her Ph.D. in psychology from Carnegie-Mellon University. She is a Professor of Psychology and International Studies at Saint Louis University where she co-founded the Women's Studies Program and won the university-wide teaching award. She is a Past-President of the Society for Cross-Cultural Research, President of the Interamerican Society of Psychology, a fellow of the American Psychological Association, Editor of the APA Division 52 journal, International Perspectives in Psychology: Research, Practice, Consultation, and the author of over 65 articles in peer-reviewed journals. Her work has centered on adolescent development and gender differences with an international perspective and a focus on Guatemala. Her book, co-authored with Deborah Stiles, The Thoughts of Youth: An International Perspective on Adolescents’ Ideal Persons (2004), includes documentation and discussion of gender differences among adolescents from 20 nations. She also co-edited, with Karen Smith Rotabi, the volume, Intercountry Adoption: Policies, Practices, and Outcomes (2012).
Judy Kuriansky received her Ph.D. in clinical psychology from New York University, where she taught for years before moving to Columbia University Teachers College where she teaches in the Department of Counseling and Clinical Psychology and supervises graduate students in special projects.  At the United Nations, she serves as the Main Representative for the International Association of Applied Psychology and the World Council of Psychotherapy; on the board of CoNGO (the Committee of NGOs at the UN); as well as the Chair of the Psychology Coalition at the United Nations. She has been awarded many honors, including the “Lifetime Achievement in Global Peace and Tolerance” from Friends of the United Nations and humanitarianism prizes from China and from Voices of African Mothers. On the Board of U.S. Doctors for Africa, a Trustee of the New York City Peace Museum, and a Fellow of the American Psychological Association, she is also the founder of the Global Kids Connect Project and the Stand Up for Peace Project, and hosted the U.S.-Africa Business Summit and award ceremonies for First Ladies of Africa.