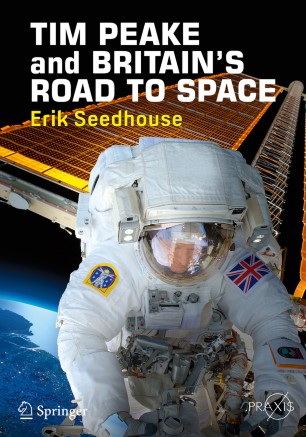 This book puts the reader in the flight suit of Britain’s first male astronaut, Tim Peake. It chronicles his life, along with the Principia mission and the down-to-the-last-bolt descriptions of life aboard the ISS, by way of the hurdles placed by the British government and the rigors of training at Russia’s Star City military base. In addition, this book discusses the learning curves required in astronaut and mission training and the complexity of the technologies required to launch an astronaut and keep them alive for months on end. This book underscores the fact that technology and training, unlike space, do not exist in a vacuum; complex technical systems, like the ISS, interact with the variables of human personality, and the cultural background of the astronauts.

Dr. Erik Seedhouse is an assistant professor in applied aviation sciences/commercial space operations and a research scientist specializing in space life sciences and physiology, the subject in which he obtained his Ph.D. while working for the European Space Agency between 1996 and 1998. In 2009, he was one of the final candidates for selection as an astronaut in the CSA’s Astronaut Recruitment Campaign. He has completed all the training required by a suborbital astronaut and hopes to fly on Blue Origin's New Shepard vehicle in the near future. Between 2008-13 he was Director of Canada's Manned Centrifuge and Hypobaric Chamber Operations. He works as an assistant professor at Embry-Riddle Aeronautical University, a manned spaceflight consultant, triathlon coach, author and public speaker. His latest book is To Mars Fast.

“This installment in Springer's space exploration series focuses on the UK's role in space exploration. … Seedhouse (Embry-Riddle Aeronautical Univ.) supplements his text with many photographs and interesting appendixes, including information on the ESA astronaut selection criteria, the Soyuz-TMA Spacecraft, and science projects on the ISS. This book will be appreciated by those with an interest in British and European space programs.” (J. Z. Kiss, Choice, Vol. 56 (1), September, 2018)
Buy options