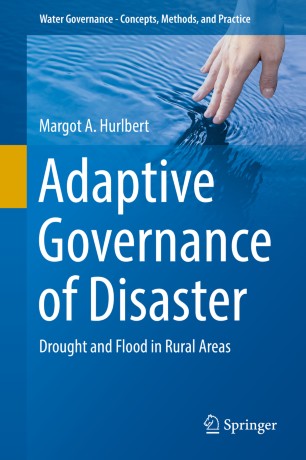 Drought and Flood in Rural Areas

This book provides a comparative analysis of policy instruments responding to climate change, drought and flood in relation to agricultural producers and their communities in four case study areas: Alberta, Canada, Saskatchewan, Canada, Coquimbo, Chile, and Mendoza, Argentina. Assessed through a lens of effectiveness, and adaptive governance, instruments advancing livelihood capitals of agricultural producers and identified and recommendations made to improve the suite of policy instruments are made.

She is the author of numerous journal articles, book chapters and scholarly papers on a broad range of topics but more recently on the subjects of energy, Aboriginal justice, water and climate change adaptation. In 1992 she co-authored a book entitled “School Law and the Charter of Rights and Freedoms” (second edition)(1992), in 2010 edited a book, “Pursuing Justice, An introduction to the Study of Justice” of which the second edition is currently prepared, and co-edited “Vulnerability and Adaptation to Drought: The Canadian Prairies and South America,” in 2016.

Her current research focuses on governance and climate change. She inter

rogates laws, policies, and practices that will address both the problem of climate change and adaptation to the changing climate. She has participated and led research projects focusing on aspects of governance including water, agricultural producer livelihoods, drought, flood, and energy. The geographical focus of her study is western Canada and South America.

Hurlbert has a long history of volunteerism in the community include volunteering at the YMCA since 1990, holding various executive positions with the Canadian Bar Association since 1987 (acting as their designate on the board of the Public Legal Education Association), filling various executive positions with SCEP Center, a non-profit organization in Regina since 1997, and being President of the Regina Women’s Network (1996-97).