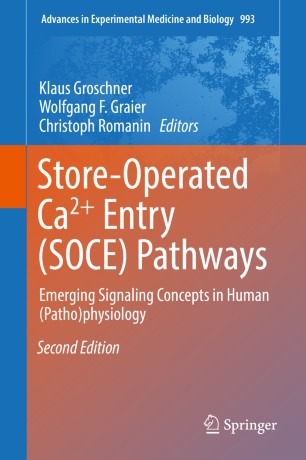 Part of the Advances in Experimental Medicine and Biology book series (AEMB, volume 993)

This second edition of the book on Store-operated Ca2+  Entry Pathways has been updated with the newest discoveries that emerged in the field within the last five years. The crystal structure of the Ca2+ signaling core complex is described which adds to a new understanding of the molecular interactions involved. Each chapter has been revised and extended. The book retains its interdisciplinary approach and supplies biochemists, cell biologists and biophysicists as well as clinicians in immunology, neurology and cardiology with valuable information on Ca2+ signaling mechanisms, functions, dysfunctions and their consequences.

Prof. Christoph Romanin studied Chemistry at the Technical University of Graz, Austria and completed his doctoral studies at the Department of Pharmacology and Toxicology, University of Graz. In 1986 he started with a post-doc position at the Institute of Biophysics of the University of Linz, Austria, where he became Professor in Biophysics (Habilitation) in 1993 and served as an Associate Professor since 1997. In 2001 he was a guest researcher at the NIA, the National Institute on Aging of the NIH in Bethesda, USA. Currently, he is vice-chairman of the institute and head of the Ion Channel Group at the Institute of Biophysics in Linz, Austria.