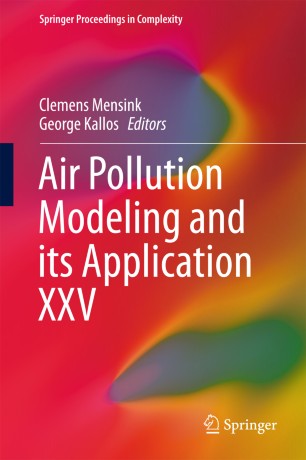 Part of the Springer Proceedings in Complexity book series (SPCOM)

Current developments in air pollution modelling are explored as a series of contributions from researchers at the forefront of their field. This newest contribution on air pollution modelling and its application is focused on local, urban, regional and intercontinental modelling; long term modelling and trend analysis; data assimilation and air quality forecasting; model assessment and evaluation; aerosol transformation. Additionally, this work also examines the relationship between air quality and human health and the effects of climate change on air quality.

This Work is a collection of selected papers presented at the 35th International Technical Meeting on Air Pollution Modeling and its Application, held in Chania (Crete), Greece, Oct 3-7, 2016.

Dr Clemens Mensink is head of the environmental modelling unit at VITO in Belgium. The unit employs 85 researchers, ICT professionals  and technicians. It develops, improves and implements methodologies and computer models to estimate the impact of human activities on air, water and soil quality in a spatial context.  Clemens received his PhD (1992) and a post graduate degree (1988) in fluid dynamics from the Von Karman Institute in Belgium. He studied chemical engineering, fluid mechanics and numerical mathematics, and received his MSc (1987) in mechanical engineering from University of Twente in the Netherlands. In 1998 he received the ENERO prize. Clemens is currently president of the International Technical Meeting on Air Pollution Modelling and its Applications. He is an expert in air pollution modelling and author of more than 80 peer-reviewed publications in international journals.  He is lecturing air pollution modelling at Ghent University (postgraduate studies in weather and climate modelling) and University of Hasselt.
Professor Dr George Kallos received his BSc (1975) and MSc (1977) from the National & Kapodistrian University of Athens, Greece, the oldest Greek University. He is now Director of the Division of Environmental Physics – Meteorology, Department of Physics. He also received an MSc (1983) and PhD (1985) from Georgia Institute of Technology, USA. He is Adjunct Professor at University of Connecticut since 2013. He is working in atmospheric dynamics, atmospheric and sea state modeling. Particular work is devoted to desert dust modeling as well as fully coupled meteorological-air pollution modeling systems. He has published 135 peer-reviewed publications and participated in more than 250 conferences (invited 70 times). He wrote 11 book chapters. He served and still serves as Associated Editor to a number of scientific journals. He has received the IUAPPA Award on 2004 for his work related to Long Range Transport and Transformation of Air Pollutants in the Mediterranean. George Kallos has guided 11 PhD students (now he has 5 new students). He has organized 12 conferences including the 18th and 35th ITM conferences.