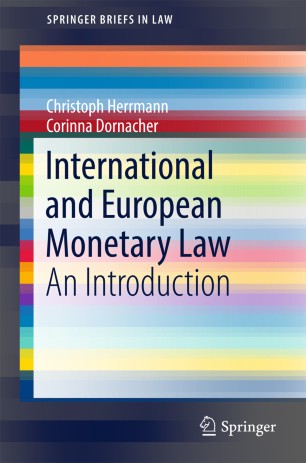 This book introduces the fundamental monetary law problems of cross-border economic activity and the solutions thereto in international monetary law, and in EU law. After decades of having been neglected by legal scholars, international and European monetary law has attracted increasing attention in recent years. With the European Economic and Monetary Union (EMU), a full-fledged monetary union between sovereign States has been established for the first time in history. Its construction is primarily a work of law, with the Treaties on European Union (TEU) and on the Functioning of the European Union (TFEU) together with a number of protocols forming the constitutional basis. Yet, European monetary Integration has never taken place in isolation from international developments. Moreover, international monetary law, namely the Articles of Agreement of the International Monetary Fund (IMF) has always played a role - initially as the external monetary addition to the internal market project, after the breakdown of the Bretton Woods System in the 1970s as one of the major driving forces for monetary Integration within the EU. On a fundamental basis, international and European monetary law address the same principled problems of monetary cooperation: how to proceed with financial transactions cross-border where no global currency exists. The present work describes the different approaches and relations and interplay between the two legal regimes.