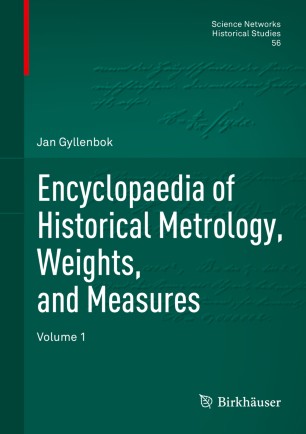 This first of three volumes starts with a short introduction to historical metrology as a scientific discipline and goes on with an anthology of acient and modern measurement systems of all kind, scientific measures, units of time, weights, currencies etc. It concludes with an exhaustive list of references.

Units of measurement are of vital importance in every civilization through history. Since the early ages, man has through necessity devised various measures to assist him in everyday life. They have enabled and continue to enable us to trade in commonly and equitably understood amounts, and to investigate, understand, and control the chemical, physical, and biological processes of the natural world.

The essence of the work is an alphabetically ordered, comprehensive list of measurement nomenclature, units and scales. It provides an understanding of almost all quantitative expressions observed in all imaginable situations, including spelling variants and the abbreviations and symbols for units, and various acronyms used in metrology.

It will be of use not only to historians of science and technology, but also to economic and social historians and should be in every major academic and national library as standard reference work on the topic.

Jan Gyllenbok was born in Lund, Sweden (1963), and graduated in 1990 with a B.Sc. in Computer Science from Lund University. Gyllenbok has over 30 years of experience of leading organizations, management teams, boards and task forces. He has been a board member and chairman of a wide range of non-profit organizations, and board member of both private and state companies. He has in recent years produced a diversity of specialist books and articles, mainly in technology and management. His interest in metrology began in his early teens, when he came across an article about various ancient measurement systems in a reference book. As the great importance of these measurement systems in different cultures through the millennia became obvious to him, he began to compare and compile information about different systems of measurement. This demanding project, which spanned over forty years, is reported in the three volumes of “Encyclopaedia of Historical Metrology, Weights, and Measures.”

“This is an outstanding compendium of all things metrological. … As a reference work, this set is outstanding, but it also rewards occasional casual reading if you're a fan of measurement. Jan Gyllenbok can take pleasure in a life well-spent.” (Mark Bollman, MAA Reviews, June17, 2019)
Buy options