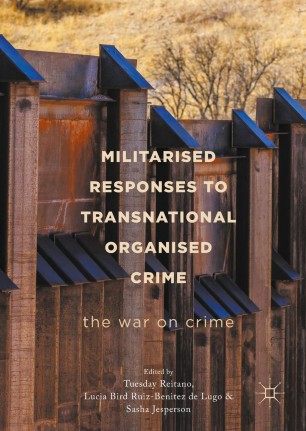 The War on Crime

This edited volume examines the use of militarised responses to different forms of criminal activity, discussing the outcomes and unintended consequences. Politicians and policymakers frequently use militarised responses to look tough on crime. The deployment of armies, navies, military assets and militarised approaches can send a powerful message, but have produced mixed results. While they generate the perception that governments are actively engaged on issues of concern to the public, and in some cases have resulted in notable successes, on the downside they have frequently also increased the loss of life, exacerbated the humanitarian consequences of a particular crime and entrenched divides between security and state institutions and the criminal proponents, narrowing the possibilities for future negotiated solutions. By focusing on four different areas of criminality – wildlife crime, piracy, migration and drug trafficking – the book allows context and evidence-based conclusions to be drawn on the strategic value and commonality of responses and their outcomes.

Tuesday Reitano is the Deputy Director of the Geneva-based Global Initiative against Transnational Organized Crime and a senior research advisor at the Institute for Security Studies in Pretoria, South Africa, where she leads five organised crime observatories for Africa.

Sasha Jesperson is the Director of the Centre for the Study of Modern Slavery at St Mary’s University, Twickenham, UK, where she is leading policy-focused research to improve the response to modern slavery. Her key interests are the involvement of organised crime groups, and the role of development interventions in preventing slavery and human trafficking.

Lucia Bird Ruiz-Benitez de Lugo is currently a fellow in the Oxford Policy Fellowship programme, consulting on law and policy for the Ministry of Finance in Ghana. Previously she pursued a career as a corporate lawyer at Slaughter and May. Lucia's contributions to the field of organised crime have focusing on human smuggling and informal extractive industries.