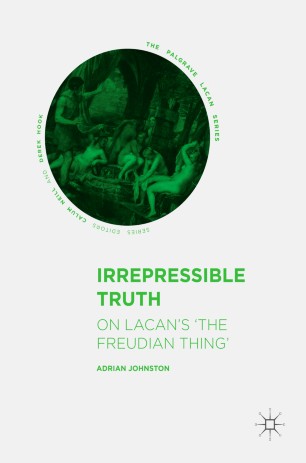 On Lacan’s ‘The Freudian Thing’

This book offers readers a uniquely detailed engagement with the ideas of legendary French psychoanalyst Jacques Lacan. The Freudian Thing is one of Lacan’s most important texts, wherein he explains the significance and stakes of his “return to Freud” as a passionate defence of Freud’s disturbing, epoch-making discovery of the unconscious, against misrepresentations and criticisms of it. However, Lacan is characteristically cryptic in The Freudian Thing. The combination of his writing style and vast range of references renders much of his thinking inaccessible to all but a narrow circle of scholarly specialists. Johnston’s Irrepressible Truth opens up the universe of Lacanian psychoanalysis to much wider audiences by furnishing a sentence-by-sentence interpretive unpacking of this pivotal 1955 essay. In so doing, Johnston reveals the precision, rigor, and soundness of Lacan’s teachings.

Adrian Johnston is a Professor in the Department of Philosophy at the University of New Mexico, and a faculty member at the Emory Psychoanalytic Institute in Atlanta, USA. His most recent book is Adventures in Transcendental Materialism: Dialogues with Contemporary Thinkers.

“This book is a textually faithful, painstaking exposition of Lacan’s seminal écrits ‘The Freudian Thing, or the Meaning of the Return to Freud in Psychoanalysis’ … . The book is stimulating and enlightening (and, importantly, clear) reading for both the uninitiated and initiated alike.” (Gregory Trotter, Continental Philosophy Review, Vol. 51, 2018)
Buy options