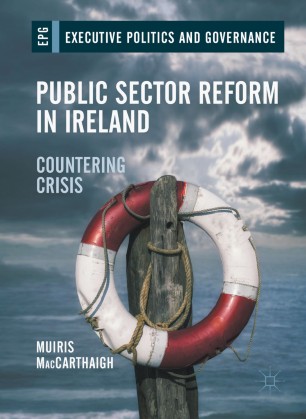 Part of the Executive Politics and Governance book series (EXPOLGOV)

This book provides a thematic case-study analysis of the wide-ranging public sector reforms introduced in one of the states most deeply affected by the global financial crisis: the Republic of Ireland. It presents a timely and apposite examination of how a crisis can be used to overcome barriers and facilitate new reform agendas. The study draws upon unique insider access to the centre of Irish government, as well as interviews with over 60 key figures, to examine the implementation of those reforms over the 2011-16 period. The book opens with a contextual analysis of the creation of the Department of Public Expenditure and Reform. Subsequent chapters explore the process of shrinking the Irish state, renegotiating the political-administrative bargain, expenditure reforms, administrative culture reforms, and political reforms. This rich ‘in action’ study of a reform agenda undertaken during a period of crisis will appeal not only to students of executive politics, cutback management and public sector reform, but also to practitioners seeking to implement administrative reforms.