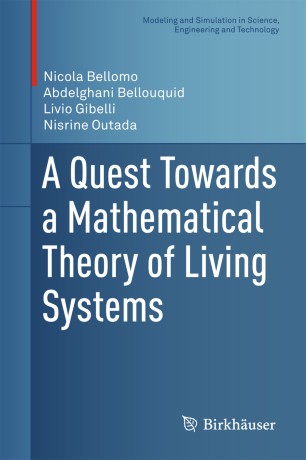 A Quest Towards a Mathematical Theory of Living Systems

This monograph aims to lay the groundwork for the design of a unified mathematical approach to the modeling and analysis of large, complex systems composed of interacting living things.  Drawing on twenty years of research in various scientific fields, it explores how mathematical kinetic theory and evolutionary game theory can be used to understand the complex interplay between mathematical sciences and the dynamics of living systems.  The authors hope this will contribute to the development of new tools and strategies, if not a new mathematical theory.
The first chapter discusses the main features of living systems and outlines a strategy for their modeling.  The following chapters then explore some of the methods needed to potentially achieve this in practice.  Chapter Two provides a brief introduction to the mathematical kinetic theory of classical particles, with special emphasis on the Boltzmann equation; the Enskog equation, mean field models, and Monte Carlo methods are also briefly covered.  Chapter Three uses concepts from evolutionary game theory to derive mathematical structures that are able to capture the complexity features of interactions within living systems.  The book then shifts to exploring the relevant applications of these methods that can potentially be used to derive specific, usable models.  The modeling of social systems in various contexts is the subject of Chapter Five, and an overview of modeling crowd dynamics is given in Chapter Six, demonstrating how this approach can be used to model the dynamics of multicellular systems.  The final chapter considers some additional applications before presenting an overview of open problems.  The authors then offer their own speculations on the conceptual paths that may lead to a mathematical theory of living systems hoping to motivate future research activity in the field.
A truly unique contribution to the existing literature, A Quest Toward a Mathematical Theory of Living Systems is an important book that will no doubt have a significant influence on the future directions of the field.  It will be of interest to mathematical biologists, systems biologists, biophysicists, and other researchers working on understanding the complexities of living systems.