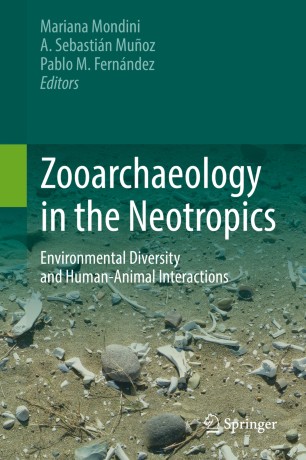 Zooarchaeology in the Neotropics

This volume offers an up-to-date and broad perspective of the archaeology of human-animal interactions through time in the Neotropical Biogeographic Region, ranging from southern North America to southern South America. The region has a rich and singular biotic history. The collection of works included in the volume –originally presented at the Second Academic Meeting of the NZWG-ICAZ – describes some of the instances of the diverse interactions of human and faunal populations in such a setting and the particular properties characterizing the derived archaeofaunal record. Understanding the zooarchaeological imprint of human insertion and evolution in this context represents an opportunity for improving our knowledge on the many ways modern humans have dealt with the colonization of the whole globe, and on the varied forms of organization they assumed within such diverse environments. The topics covered in this volume shed light on different and complementary aspects of the state of the art in zooarchaeological research in the Neotropics, and reveal how much Neotropical zooarchaeology has been growing in the past few decades. Several chapters focus on marine resources, covering a broad range of the diversity found in the Neotropical coastal environments. Another set of chapters deals primarily with inland Neotropical animals –including terrestrial, riverine/estuarine and avian faunas– and also with varying societal organizations. Natural formation processes in Neotropical environments are also dealt with in this collection of works. Finally, Neotropical faunas also entail unique methodological challenges, and some chapters provide new information from this perspective. Altogether, these contributions help grasp how unique human-animal interactions have been in the Neotropics, and yet how much can be learnt from them even for other settings and other times.