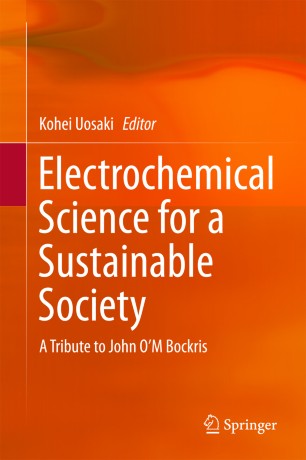 Electrochemical Science for a Sustainable Society

A Tribute to John O’M Bockris

This book honors Professor. John O’M. Bockris, presenting authoritative reviews on some of the subjects to which he made significant contributions – i.e., electrocatalysis, fuel cells, electrochemical theory, electrochemistry of single crystals, in situ techniques, rechargeable batteries, passivity, and solar-fuels – and revealing the roles of electrochemical science and technology in achieving a sustainable society.
Electrochemistry has long been an object of study and is now growing in importance, not only because of its fundamental scientific interest but also because of the central role it is expected to play in a future sustainable society. Professor John O’M. Bockris contributed greatly to various aspects of fundamental and applied electrochemistry – such as the structure of the double layer, kinetics and mechanism of the electrochemistry of hydrogen and oxygen, electrocatalysis, adsorption and electrochemical oxidation of small organic molecules, fuel cells, electrocrystallization, theoretical electrochemistry, new methods, photoelectrochemistry, bioelectrochemistry, corrosion and passivity, hydrogen in metals, ionic solutions and ionic liquids, and molten silicates and glasses, as well as socio-economic issues such as the hydrogen economy – for over half a century from 1945 until his retirement in 1997.