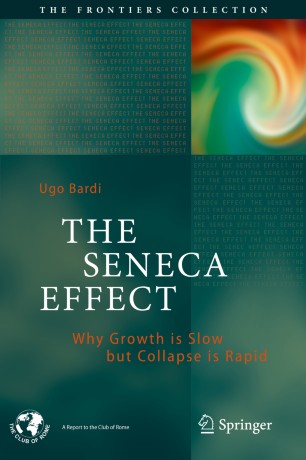 Why Growth is Slow but Collapse is Rapid

​The essence of this book can be found in a line written by the ancient Roman Stoic Philosopher Lucius Annaeus Seneca: "Fortune is of sluggish growth, but ruin is rapid". This sentence summarizes the features of the phenomenon that we call "collapse," which is typically sudden and often unexpected, like the proverbial "house of cards." But why are such collapses so common, and what generates them? Several books have been published on the subject, including the well-known "Collapse" by Jared Diamond (2005), "The collapse of complex societies" by Joseph Tainter (1998) and "The Tipping Point," by Malcom Gladwell (2000). Why The Seneca Effect? This book is an ambitious attempt to pull these various strands together by describing collapse from a multi-disciplinary viewpoint. The reader will discover how collapse is a collective phenomenon that occurs in what we call today "complex systems," with a special emphasis on system dynamics and t

he concept of "feedback." From this foundation, Bardi applies the theory to real-world systems, from the mechanics of fracture and the collapse of large structures to financial collapses, famines and population collapses, the fall of entire civilizations, and the most dreadful collapse we can imagine: that of the planetary ecosystem generated by overexploitation and climate change. The final objective of the book is to describe a conclusion that the ancient stoic philosophers had already discovered long ago, but that modern system science has rediscovered today. If you want to avoid collapse you need to embrace change, not fight it. Neither a book about doom and gloom nor a cornucopianist's dream, The Seneca Effect goes to the heart of the challenges that we are facing today, helping us to manage our future rather than be managed by it.

seph Tainter's 1988 masterpiece, "The Collapse of Complex Societies." Since we live in a society that is just in the process of rounding the curve from growth to decline, this is information that should be of keen interest to every intelligent person.

Why do human societies collapse? With today's environmental, social and political challenges it is a question that is more than academic.  What can we learn from history?  How can we avoid the pitfalls?  In this fascinating, well written book, Ugo Bardi provides many of the answers.  Here is a book to feast on, to devour and be stimulated by, a book packed full of insights and ideas which will leave the reader satisfied, curious and stimulated.  Simply wonderful.

Graeme Maxton, Secretary General of the Club of Rome

Ugo Bardi teaches physical chemistry at the University of Florence, in Italy. He is interested in resource depletion, system dynamics modeling, climate science and renewable energy. He is member of the scientific committee of ASPO (Association for the study of peak oil) and regular contributor of "The Oil Drum" and "Resilience.org". His blog in English is called "Cassandra's legacy". His most recent book in English Extracted: How the Quest for Global Mining Wealth is Plundering the Planet (Chelsea Green”, 2014. He is also the author of The Limits to Growth Revisited (Springer 2011).

“The bulk of this book is a catalogue of collapses. Bardi starts small with structural failures, such as collapsing building, avalanches, or cracks in metal objects and how these grow. He then walks the reader through a selection of cheerful examples of past or imminent collapses on larger scales … . Bardi’s book is an interesting and worthwhile exercise in bringing together many seemingly disparate topics into one framework that should get readers thinking.” (Leon, NHBS Book Shop, nhbs.com, September, 2018)
Buy options