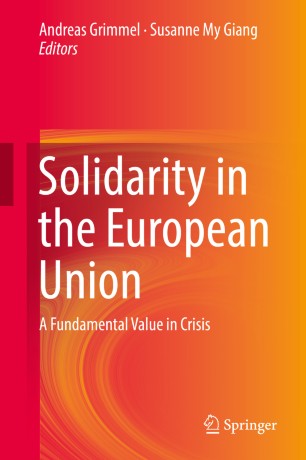 Solidarity in the European Union

A Fundamental Value in Crisis

This volume approaches the current crisis of solidarity in the European Union from a multidisciplinary perspective. The contributions explore the concept of solidarity, its role in the European integration process, and analyze the risks entailed by a lack of solidarity.
Experts from various academic fields, such as political science, law, sociology, and philosophy, shed new light on contemporary challenges such as the migrant and refugee crisis, the Eurozone crisis, nationalist and separatist movements, and Brexit. Finally, they also discuss different solutions for the most pressing problems in EU politics.
The book has two main aims: Firstly, to show that solidarity is a key element in solving the EU’s contemporary problems; and secondly, to reveal how the crisis of solidarity has become a crucial test for the integration project, as the nature of the crisis goes beyond the well-known shortcomings in the EU’s structure and problem-solving capacities.

Dr. Andreas Grimmel is Research Associate and Lecturer at the Institute for Political Science at Universität Hamburg and at the Institute for European Integration, Europa-Kolleg in Hamburg. He has been Visiting Fellow at Harvard University, the University of Cambridge and Sciences Po in Paris. Furthermore, he was Chercheur en Sciences Politiques at the European Court of Justice (CJEU) and postdoctoral Guest Researcher at ARENA – Centre for European Studies in Oslo, at the Max Planck Institute for Comparative Public Law and International Law in Heidelberg, and at the Fudan Development Institute (FDDI) in Shanghai. His research includes European Union politics and European integration, regional integration, international organizations as well as political theory and philosophy.
Susanne My Giang (Dipl. Pol.) is PhD candidate at Universität Hamburg, Institute for Political Science. She has studied Political Science and Southeast Asia Studies and was Visiting Fellow at the William Joiner Center for the Study of War and Social Consequences in Boston/USA. After finishing her studies, she worked at the Centre d'Études et de Recherches Internationales (CERI) at Sciences Po in Paris. Furthermore, she was a Guest Researcher at the Department of Political Science and the Center for International Climate and Energy Policy (CICEP) at the University of Oslo, at the Vietnamese Academy of Social Sciences, Vietnam National University in Hanoi, at the Institute for Political Science, Universität Heidelberg, and at the Fudan Development Institute (FDDI) in Shanghai. Her main research fields are energy system transformation as well as environmental and climate policy in Southeast Asia.

“This volume originates from a conference on ‘Solidarity and its Crisis in the European Union’ that was held at the University of Hamburg … and aims to discuss how solidarity is applied in practice among the Member States of the Union. It is a vital contribution for understanding the solidarity of the European Union (EU). …This edited volume is highly recommended to all who have even a basic interest in understanding the solidarity of the EU.” (Hamza Preljević, Insight Turkey, Vol. 20 (3), 2018)
Buy options